Axie Infinity is leading the wave for play-to-earn games, the new phenomenon in the crypto world. This article will dive into what makes this game stand out and what you should know before playing it.

What Is Axie Infinity?

Axie Infinity is a blockchain game inspired by the classic Pokemon.  However, instead of catching pocket monsters in the wild, you’ll be able to breed and trade digital pets called Axies.

Axies are “fierce creatures that love to battle, build, and hunt for treasure” and players can collect and bring them out to battles. Being a top play-to-earn game, the blockchain technology in Axie Infinity is implemented to reward players for their engagement.

How To Earn Money From Axie Infinity?

When you do daily quests, adventure (PvE), and arena (PvP), you will be rewarded with something called a Small Love Potion (SLP), which can be traded on many exchanges such as Binance and Uniswap for real money. SLPs are also given out to players who manage to climb high in the rankings.

Another amazing usage of SLPs is to breed new Axies. This enables you to switch up your team formation or sell them on the marketplace. You can tell the play-to-earn potential of Axie Infinity is very real when the most expensive Axie ever sold was 300 ETH. 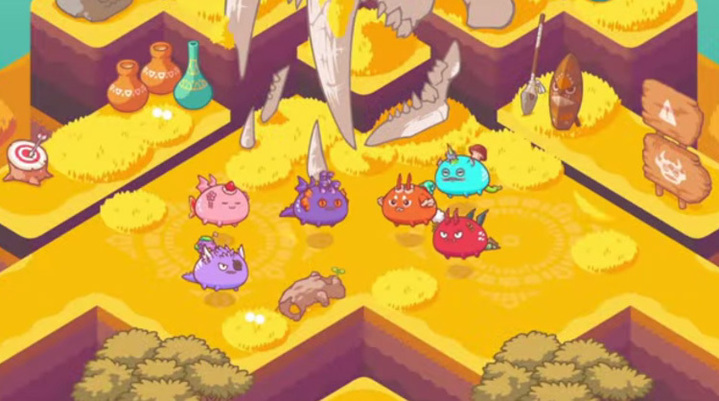 There is another cryptocurrency called Axie Infinity Shards (AXS) available for trading. Infinity Shard holders can claim rewards if they stake their tokens, play the game and participate in key governance votes. You can also play games within the Axie Infinity universe to earn AXS.

How To Start Playing Axie Infinity?

First, because this is a blockchain game, you need a digital wallet to store crypto. The creator of Axie Infinity, Sky Mavis studio, recommends using Metamask as your wallet and Google Chrome as the browser.

Next, buy some Ethereum through a trusted cryptocurrency exchange. Then you will need to download the Ronin wallet, which uses an ETH sidechain made specifically for blockchain games. After that, you can download the Axie Infinity application through their website.

Now is time for buying Axies. You need at least 3 Axies to start playing the game, with the cheapest ones ranging from 0.038-0.039 ETH (above $200). This can be expensive for some but in the future, the game will allow new players to receive non-transferable Axies with limited play to earn potential for free.

These stats are crucial for winning battles, and they’re influenced by 2 main characteristics: body parts and classes. Each Axie has a unique combination of body parts and a class that make them different from other Axies, even those of the same species. 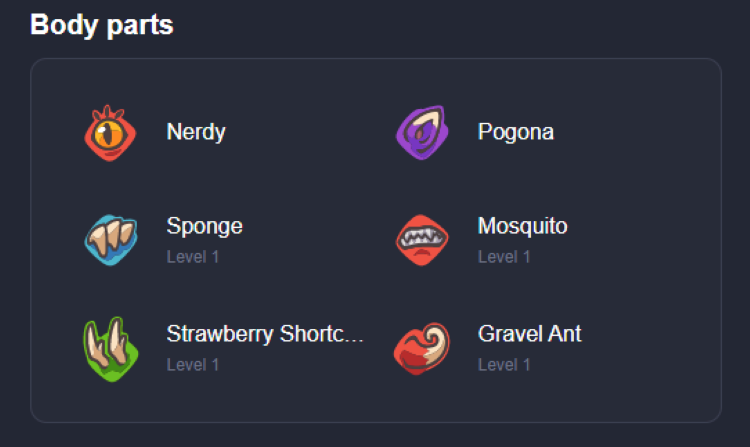 There are a total number of 6 body parts on each Axie: eyes, ears, horn, mouth, back, and tail. Only horns, mouths, backs, and tails affect which ability cards Axies can use in battles (more on that below). Body parts also have many colors, each one adding different stats for the Axie.

Axie Infinity features 9 classes, 6 of which are known as common: Aquatic, Beast, Bird, Bug, Plant, Reptile. The other 3 are secret classes: Mech, Dawn and Dusk, which only have a 33% of appearing when breeding 2 purebred Axies together.

Just like in Pokemon, every class has its strength and vulnerability. Here’s how the Axie classes interact:

Classes also determine Axie’s base stats. Each Axie has 140 base points but they’re divided differently. This is why Plants are usually more ‘tanky’ and Birds are faster.

The process of choosing your first Axies is incredibly important as it will become the deciding factor in winning matches, so you should consider checking out the Axie Infinity Discord and Reddit to ask for more guidance.

Another factor that makes Axie battles unique is the ability cards in play. The cards provide a variety of effects that change the battle 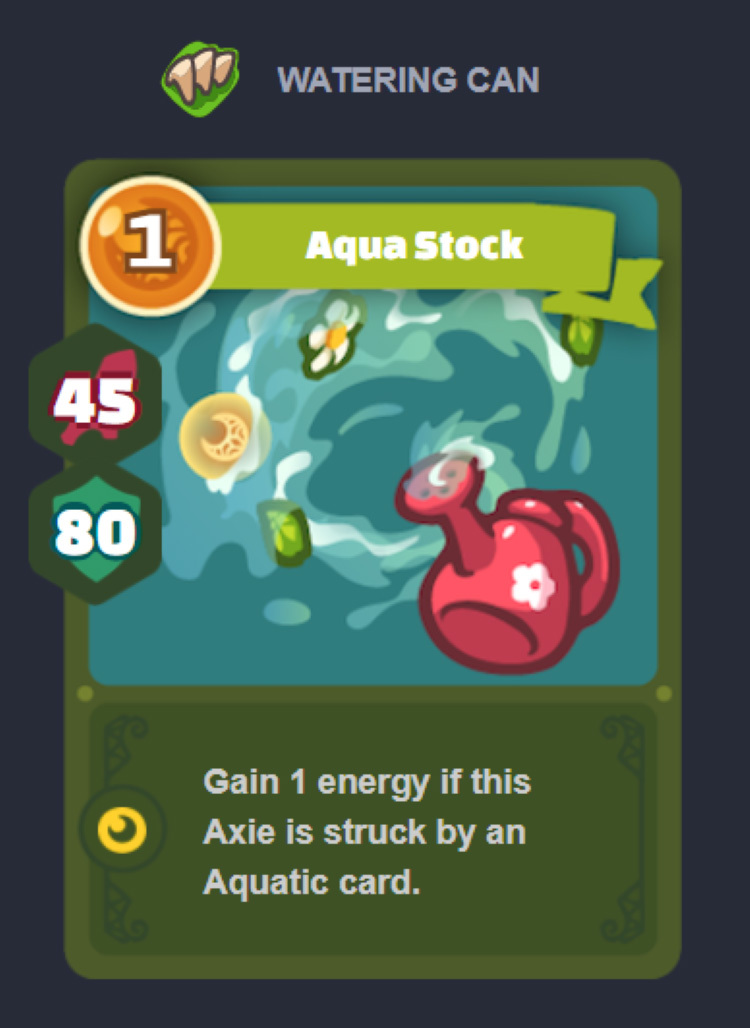 There are 5 variables to a card. The yellow ball indicates how much energy it takes to play the card. The red sword shows how much damage the card deals. In contrast, the green shield is defense.

Every card has an ability, which in this case of the card pictured above is “Gain 1 energy if…”. There are many amazing abilities, such as healing, stat modification, energy-stealing, poison… The final variable is the color of the card. Each color correlates with a class so when the class matches the card color, you will get a 15% bonus in attack/defense.

Every Axie comes with 4 ability cards that cannot be altered. The 4 body part types dictate what cards an Axie has. You can take three Axies into a battle, meaning your starting deck for each battle is therefore 12 cards in total. At the start of combat, you get 6 random cards out of your 12, and after each round you draw 3 more.

Perhaps the most game-changing effects of ability cards are “buffs” and “debuffs” — positive or negative status effects Axies can acquire in battle.

There are only three buffs in Axie Infinity at this point, but they can easily change the tide of a fight. The buffs can all stack, so they are especially effective when multiple buffs of the same type are played on an Axie one after the other.

Debuffs are negative effects you can play on the opposing Axie in a battle to give yourself an edge. There are 13 debuffs.

3 of the debuffs negatively affect stats, like opposites of the three buffs. Like their positive counterparts, these three debuffs can be stacked. They are:

The other 10 debuffs are negative status effects.

Note that there are certain ability cards that remove debuffs from your Axie, like Cleanse Scent or Refresh. Otherwise, most effects will fade after a number of rounds specified on the debuff card.

What Makes An Axie Valuable on The Marketplace?

Selling Axies is one of the main ways to earn money, but how do you know which Axie is worth more than others? It all comes down to 3 factors: rarity, ability, and aesthetics.

People are willing to pay more money to buy an Axie that is hard to find. One such example is Origin Axies. There are only 4088 of them in the game, all sold to pre-sale supporters.

Breeding the two Origin Axies together will reward a 33% chance that the child has a ‘Mystic part’. These parts not only have peculiar designs (which adds to the aesthetics), but they also own the exclusive right to be upgraded to Legendary. 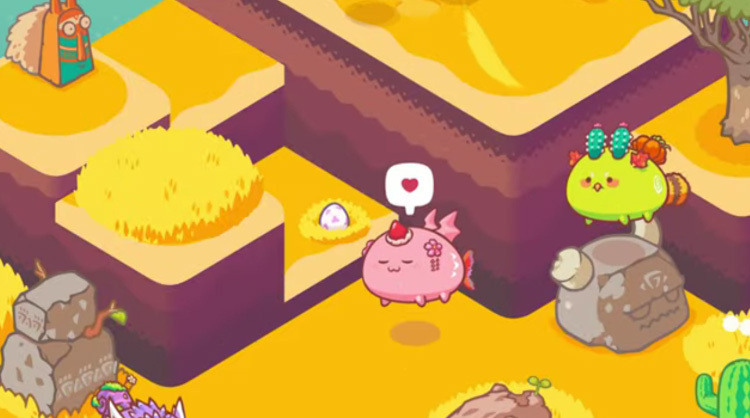 Legendary body parts are more effective in combat, which brings us to the next point: ability. Axie Infinity buyers will look for those that can fit nicely into their team and help them win battles.

Effective Axies are subjective and depend on the other members of the team, but purebred Axies, which are those that own 6 body parts that match their class, are very much desirable. This is because they get a 15% damage/defense no matter which card they use.

In addition, you can search the Axie leaderboard to see what the top players are using. If your Axie matches the meta, it can be sold for more value.

How Much Money Can You Make Selling Axies?

Valuable Axies can be sold as Non Fungible Tokens(NFTs) for serious cash. In fact, the highest-value Axie sale of all time was for 300 Ethereum, which is equal to $700,000 as of July 2021. A few high-value Axie sales in the past few years are shown on the timeline below.

But what makes an Axie valuable? Here are a few important things to know when you buy and sell:

Axie Infinity is an entirely new type of online game, the kind that deals with NFTs to gamify a real trading environment with battles and unique features. Only time will tell if these types of games grow more numerous, but they certainly have potential. While the gameplay is far from an immersive console game or a metaverse-like experience, it is challenging and financially rewarding for the right type of gamer and should be given a serious look.