Based on the Pragmatic Play’s hit release from 2018, Chilli Heat Megaways is providing players with sizzling hot reels and a festive gaming atmosphere.

This Mexican fiesta is taking place on a highly volatile 5-reel grid with one special horizontal reel located above the main grid. The winning potential is set at 5,000x the bet and, although not the most powerful Pragmatic game on the market, it can bring some first-rate prizes with many ways to win. 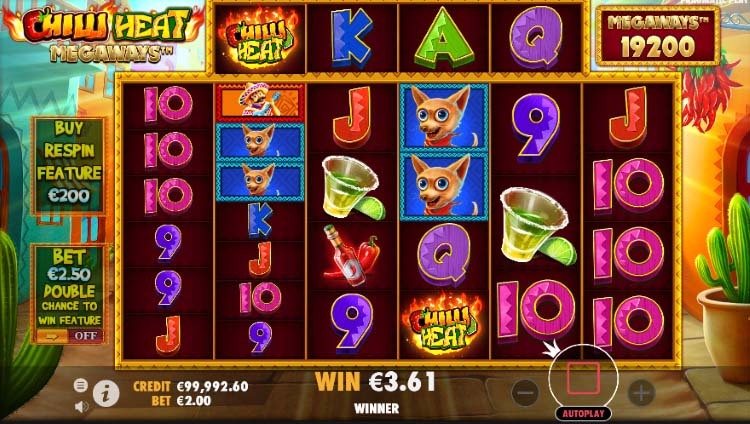 The upgraded version of the original Chilli Heat title has several features typical of all megaways releases. Possible ways to win go up to an amazing 200,704, main grid can contain between 2 and 7 symbols on each reel, and there is also a tumble/cascading feature that presents players with the possibility to create more winning combos in just one spin.

On the higher end of the paytable, players will find fiesta essentials such as tequila shots, chillis, and mariachi while the low-paying symbols are standard card suits. The Wild symbol appears only on reels 2, 3, 4, and 5 and it substitutes for all regular symbols, helping players land more wins. 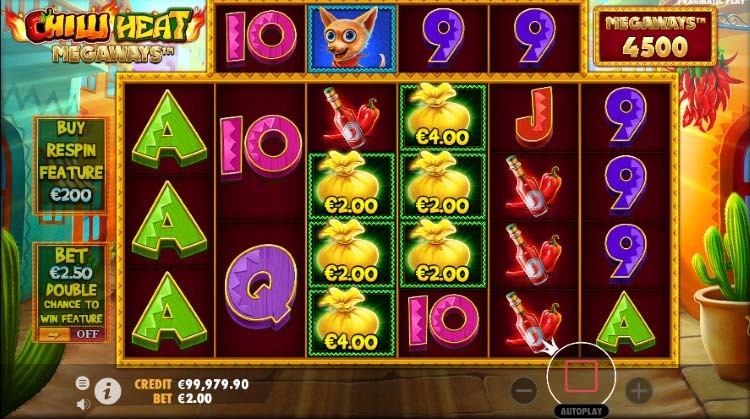 The major difference between the original and megaways version of the Chilli Heat slot is in the fact that the new release doesn’t have Free Spins round. Instead of it, the studio has focused on creating a Respin feature that will capture the hearts and minds of players all over the world.

This special feature is triggered when a player lands at least 6 Money symbols. Each one of them comes with a random money value and they are locked in place while the rest of the symbols disappear from the grid. The 1st and the 6th reel are locked while the Respin counter is set on 3. Every time a new Money symbol lands on the grid it gets locked to the position and the counter is reset back to the starting number of spins.

What makes this bonus round even more exciting are the special symbols that appear on the horizontal reel bringing sweet extras that boost players rewards:

Ante Bet is another extra Pragmatic Play players have the opportunity to activate and enjoy. This feature doubles the chances of activating the bonus round but that cost 25% more over the initial bet. Also, if country regulations allow, players also have access to the Bonus Buy feature.