Pragmatic Play is an award-winning software provider of casino games, renowned for its high-quality products. It launches approximately one new slot per week, each better than the last one, and its latest release by the name Mystic Chief promises a very volatile, yet entertaining playing experience.

The dust from the release of Piggy Bank Bills hasn’t settled yet when the brand’s portfolio became bigger for another outstanding title. This time, Pragmatic presents the slot inspired by Native American culture and striking visual appeal.

It is played on the unusual grid set up of 5 reels where the first and last reels have 3 rows, while the rest feature 4 rows. This structure opens the doors for up to 576 ways to win, and a maximum prize of up to 5,000x the bet.

Following the theme completely, symbols include a female character, totems, pipes, hatchets, daggers, drums, cougars, wolves, horses and eagles. As the main protagonist, the chief has a role of a Wild, while there are also a bonus card and Scatter.

Mystic Chief is a highly volatile game with RTP nicely above the average at 96.55%. Any desktop or mobile device is suitable for playing this release, providing a wide betting range from $0.20 to $100 per spin.

The chief symbol can appear in two variants, as a regular Wild and as Expanding Wild. Both land only on reels 2, 3 and 4, substituting for all regular cards. However, the Expanding Wild comes with an extra boost – a random multiplier from x1 to x10 applied to any win. Better yet, if there are more than two Wilds on sight, values of their random win multipliers are added together before being applied.

Blue dreamcatcher is a Bonus symbol, appearing only on the first and fifth reel. Two Bonus card landing simultaneously transform a random number of symbols on reels 2, 3 and 4 into non-expanding wilds.

The real fun begins when the Scatters are in the view since this action triggers 8 free spins. Each free spin comes with guaranteed expanding Wild, while every Bonus symbol awards an extra spin. 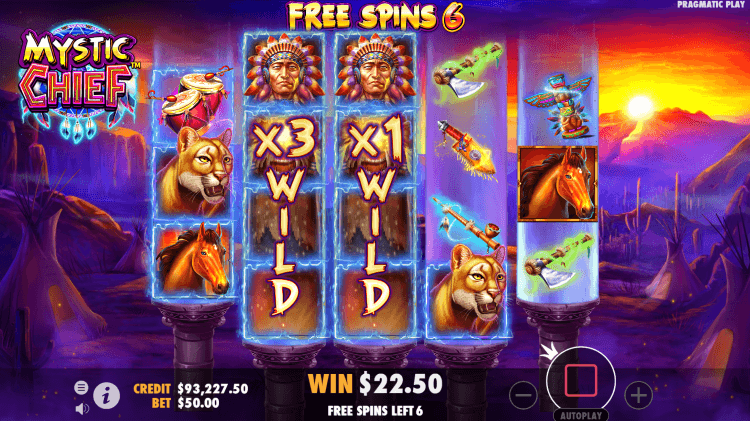 But here’s a twist – if 2 Bonus symbols hit at the same time, they bring two more spins, plus upgrade the feature to Super Free Spins. During Super Free Spins, the two feature-triggering Bonus symbols remain sticky till the end of the round. Meaning that a random number of symbols on reels 2,3 and 4 are transformed into non-sticky Wilds on every super free spin.

Enriched by beautiful design and state-of-the-art graphics, the game is equally visually attractive as it is fun. A big winning potential, expanding Wilds with multipliers and two types of free spins are more than enough to pique the interest of players.

Released on October 14, the Mystic Chief slot represents yet another highly engaging title in Pragmatic Play’s portfolio that is getting bigger by the week. The provider has two more slots, Cash Bonanza and Day of Dead, scheduled for a launch very soon.