Making something fresh from the theme of Ancient Egypt retold through thousands of slots is not an easy task. However, Play’n GO managed to do it splendidly in its new Sisters of the Sun slot.

The story revolves around the powerful Egyptian goddesses Sekhmet, Hathor and Bastet, each with a unique gift to bestow on the ones they deemed worthy. In this release, the provider offers a thrilling gameplay with an abundance of special features and winning potential of up to 15,000x the bet. 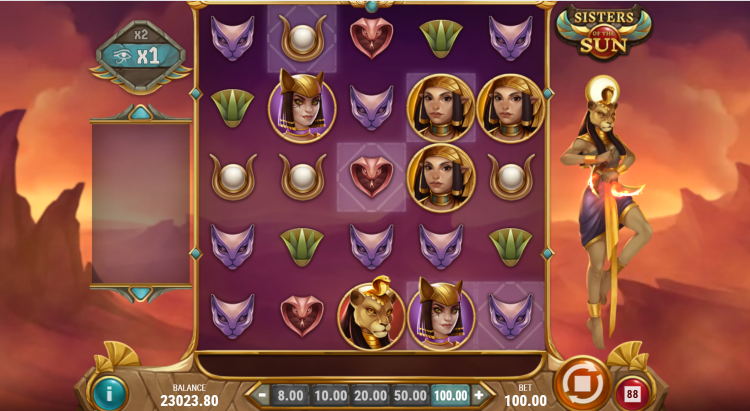 Following the success of Moon Princess and Rise of Olympus, the transparent grid became popular amongst players as it offers a clear goal. It is present here as well, in the 5×5 configuration with more than a solid RTP of 96.20% and a high level of volatility.

Sisters of the Sun is a cascading slot where symbols cascade down the grid, aiming to create winning clusters achieved by getting three or more symbols in a row. Winning symbols are then removed, allowing new symbols to fall and take their place.

In addition, five random grid locations are marked with the Eye of Ra on every spin. If any winning symbol covers it, the win multiplier increases by 1, but resets on each new spin (expect in the Free Spins round). Winning combinations are multiplied by the value currently displayed on the right side next to the grid.

Each goddess possesses a unique feature to either transform or destruct symbols on the grid – Sekhmet converts one set of symbols into another symbol, and Bastet removes two sets of symbols. The active goddess appears on the left side of the grid to show which feature plays out.

A Scatter, designed as a scroll, landing on reels bonds the sisters together and activate the Sisterhood feature. Here all three sisters perform their Goddess Powers in one free round while clearing the grid during this feature triggers Free spins.

Once the Free Spins round is activated, the player has to select its favorite goddess, each bringing a different number of free spins. Fewer spins come with much higher risk, but also much higher potential. During this feature, the win multiplier doesn’t reset.

Besides these exciting special features, players are kept on the edge of their seats with the goal of clearing the grid. Doing so awards a prize of x50 of the player’s bet, multiplied by the win multiplier. 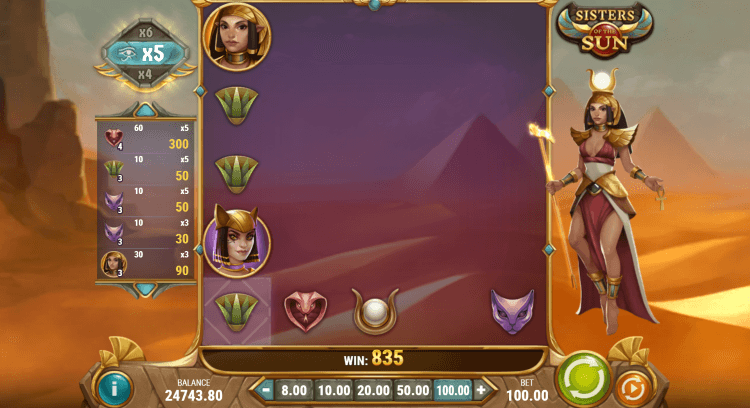 Most slots with Egyptian theme revolves around well-known Gods such as Osiris, Anubis, or Ra. Bastet also makes the appearance, but except in the Day&Night game by TrueLab, it rarely has a major role.

Alongside Sekhmet and Hathor, she is the main protagonist of Sisters of the Sun slot which gives a refreshing take on this theme saw so many themes before. According to Head of Games, Charlotte Miliziano, Play’n GO might go even deeper into the history of Ancient Egypt in the future:

“The regal nature of Ancient Egypt narratives, gods and pharaohs continue to be a favorite amongst players as the content is so rich. There are so many gods, goddesses and pharaohs that we haven’t heard of. Maybe we’ll be the ones to tell their stories in our games.”

Launched at the beginning of September 2021, the Sisters of the Sun slot is an engaging game with big winning potential, an unusual 5×5 grid, and cascading mechanics. Just like other high-quality releases by Play’n GO, this title comes highly recommendable to all slot lovers.