Once again, Pragmatic Play takes players deep into the jungle with its new slot, this time to find the majestic ape that guards the valuable prizes. Gorilla Mayhem is exciting as it sounds and provides fun, bonus-infused gameplay with the winning potential of up 5,000x the bet.

The adventure takes place on the 5×4 grid with 1,024 ways to win and combines Wild multipliers with fearsome creatures as players search for gleaming crystals to trigger the bonus. Since the bonus is re-triggerable, what great treasures await in the depths of the undergrowth? 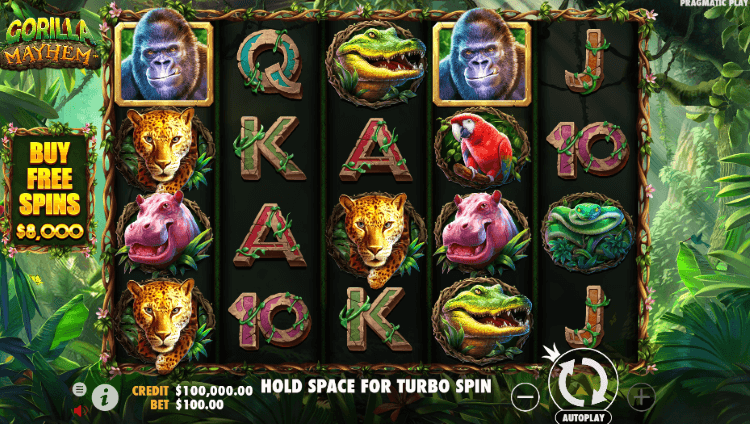 In search of the mighty silverback through the beautiful, yet deadly forest, don’t be frightened to encounter some of its wildlife. The mighty gorilla is the most valuable symbol, closely followed by images of leopard and crocodile.

A ferocious hippo, red parrot and slithery snake represent medium symbols, while the lowest wins produce royals from A to 10. As the symbols on reels, the gameplay is also highly volatile and you can try it out in real money mode from as low as €0.20 bet per spin.

“Our animal and jungle-themed games always resonate with players, and we expect Gorilla Mayhem™ to unleash its powerful gameplay in a similar fashion. The animations, features and overall feel is yet another example of the attention to detail that our development team pays to each game, resulting in another fantastic title.”

A True Gorilla Mayhem Starts With Bonus Round

In such a volatile environment, the Wild symbol has never been more at home, substituting all symbols except crystal Scatter. Another special symbol that might randomly appear in the base game anywhere except on the first reel is Golden Gorilla.

When appear, Golden Gorillas substitute for the gorilla symbol and adds a multiplier. These cards come in three variants – one golden gorilla brings a 1x multiplier, two represent a 2x multiplier, and three golden apes have a 3x multiplier.

Three, four or five crystal Scatters landing on reels at the same time triggers the jungle mayhem with 10, 15 or 20 free spins respectively. The scenery doesn’t really change, just add a Gorilla meter on the right side of the grid and the animated silverback on the right side. 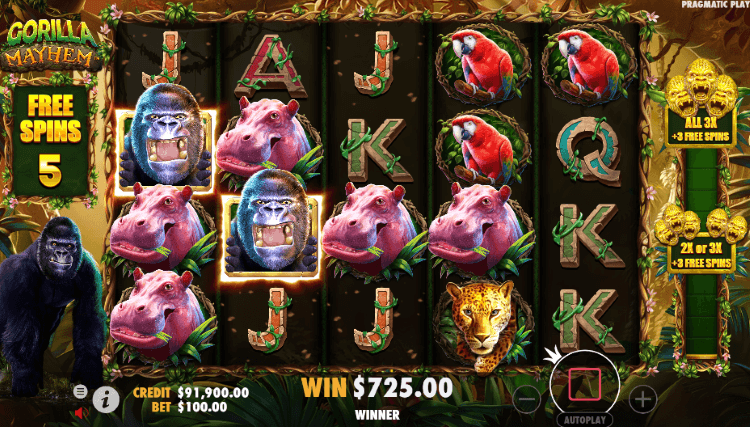 All varieties of Gorilla symbols that land during free spins are collected in the meter, initiating progressive wins. Players start at level 1 where Golden Gorillas can land in any of its normal multiplier variations.

Adding considerable value to Pragmatic Play’s award-winning library, the wild jungle action in the Gorilla Mayhem slot follows the launch of the brand’s recent hits Magic Money Maze and Tropical Tiki. Currently producing up to seven new slots per month while also delivering other types of casino games, Pragmatic Play is rightfully at the top of the industry for years now.