The history of Las Vegas is a contradiction. On one hand, it is full of glitz and glamor, fun and sun, skyscrapers, and success. And on the other hand, you have the shady mob dealings, desperation, and corruption that lie beneath the city’s surface and make Las Vegas what it is today.

Las Vegas is known all over the world as the home of land-based gambling. The 24/7 blinking of neon lights on the Las Vegas strip and the ever-present jingling of slot machines in every building have become a global symbol of gambling. But what are the factors that made Las Vegas what it is today?

Most people know that American organized crime syndicates were originally behind Las Vegas’ success but not many of them know the true backstory that led to the creation of Sin City. After all, there is a reason the famous saying ‘What happens in Vegas, stays in Vegas’ was crafted many decades ago.

The rich Las Vegas mob history of this desert-city is fascinating in more ways than one. The secret mafia dealings that were happening behind the closed doors of now-legendary casinos add an extra-thick layer of excitement and allure no person is immune to.

Why the Mafia in Las Vegas became involved in gambling

When American prohibition was lifted in 1933, the Mob needed to find another way to make money – selling illegal alcohol had been a huge business. They wanted to stick to something widely illegal because it was sort of the mob’s business model to provide services the legal world could not supply.

A man named Meyer Lansky, who was great with numbers and statistics, was the one to discover that gambling was a greatly in-demand activity that people wanted to do but could not because it was illegal in most places. He organized illegal casino rings in New York City, New Orleans, and the Bahamas. Before long, gambling services became the Mob’s main source of income.

Las Vegas originally began to shoot up in population in 1930, when President Herbert Hoover approved the building of the Hoover Dam (then called Boulder Dam) in the desert of Southern Nevada. Tens of thousands of people moved there for work, nearly all of them men. The Mob bosses saw the suddenly-large city full of men with no attachment to the area and seized upon the chance to offer illegal but highly profitable services like high-stakes gambling.

Gambling didn’t stay illegal for long, though. In 1931, the government saw how profitable it would be for local businesses, so the Nevada legislature outright legalized casinos in their state. The Mob saw a golden opportunity to expand its gambling activities to the general public. That way, they could make a lot more money by scaling up their casinos and attracting gambling tourists from around the nation all while abiding by Nevada law.

People Who Made Las Vegas

As mentioned above, Lansky was the mastermind behind the Mob’s original casino operation and was therefore dubbed “The Accountant.” His calculating approach to the business is summed up by his famous words:

“There’s no such thing as a lucky gambler, there are just the winners and losers. The winners are those who control the game… All the rest are suckers.”

Siegel was basically the PR man who brought Las Vegas into the American spotlight. He was a violent gangster who partnered with Lansky on a lot of projects, but he was also a sort of celebrity who spent time with all the pop culture icons of the day during his downtime. The resulting influence gave him a platform to promote Las Vegas to the public.

However, Siegel borrowed money from the wrong people in the process. He borrowed from well-known celebrities to the Kansas City mobsters. This would only make him a bigger target and once Siegel missed a payment he was shot and killed in his home in Beverly Hills, California.

Frank was obviously not a mobster himself, but he allegedly had a lot of friends in organized crime. His personal ties were part of the reason for his long residency in Las Vegas beginning in 1953. Sinatra’s presence was what really cemented Las Vegas’ place in pop culture and brought it global popularity along with the members of his Rat Pack, Dean Martin, Sammy Davis Jr., and Joey Bishop.

Hughes was a billionaire who helped to move ownership of Las Vegas away from the mob and towards honest American corporations. In the late 1960s, he bought several large Vegas casinos. From there, Vegas casinos continued to evolve into the (mostly) above-board businesses they are today.

One of the coolest things about visiting Las Vegas is the incredible variety of casinos you have access to. There are dozens of huge, spectacular, uniquely themed casinos for customers to visit. From the Roman emperor’s palace to the sphinx and pyramids, Las Vegas is the perfect adult playground for people coming from all corners of the world. 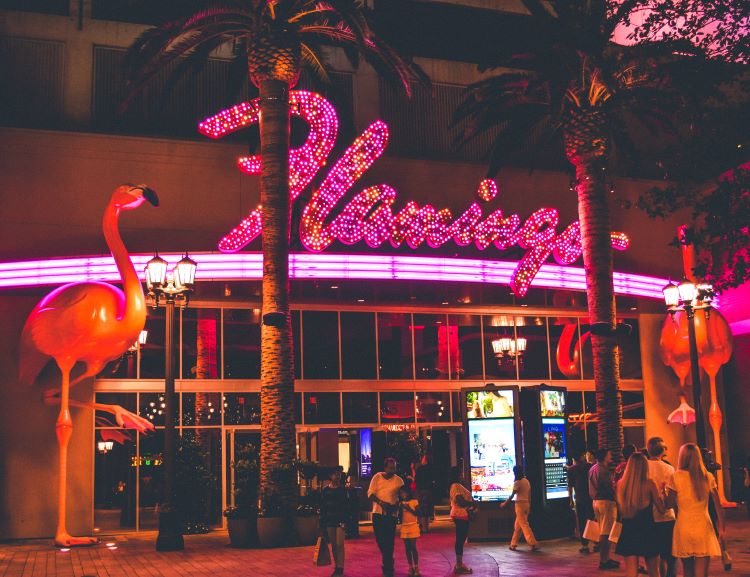 The casino grounds are also spattered with spectacles like man-made volcanoes that erupt every night or 140-meter tall jets of colored water that spurt from fountains in synchronized shows every few hours.

Some of the most famous Las Vegas Casinos include:

In the past decade, online gambling in the form of live stream betting has cut into the liveliness of the Las Vegas casino floor. Whereas Las Vegas used to be considered without a doubt the biggest gambling city on Earth, it has gained a lot of “rivals” from all around the world, from New Jersey to China. Whatever happens in the future though, Vegas will surely maintain a special place in the world of gambling.