The South Las Vegas Strip is nearly as famed as the city of lights itself. This neon-filled street, all sparkling and shining, is the home of several sky-touching buildings of legendary status. The quality of these prestigious casinos and hotels is just as rich as their history.

The Italian-themed casino is a staple of Las Vegas and one of the most iconic locations in the city. The casino and its associated Palazzo hotel are quite the local landmarks. For a number of years, the Palazzo was the largest hotel in the world with over 7,000 hotel rooms and more than 2,500 slot machines. 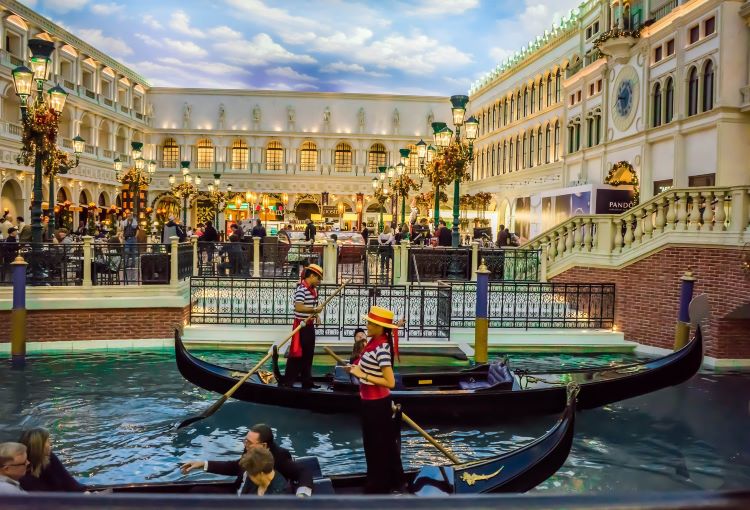 It is the Rolls-Royce of gambling establishments as its architecture has been inspired by the ornate Renaissance era that makes the gaming experience classy and vibrant. Aside from that, the Venetian has one of the biggest slots collections in the world, filling the two-story casino from end to end.

Both the hotel and casino are standing today on the former property of the legendary Sands Hotel. The history of the Sends is truly colorful since it contributed greatly to the Las Vegas we know today. As the casino had secured stakes from mafia groups and even the famous actor Frank Sinatra and his Rat Pack. 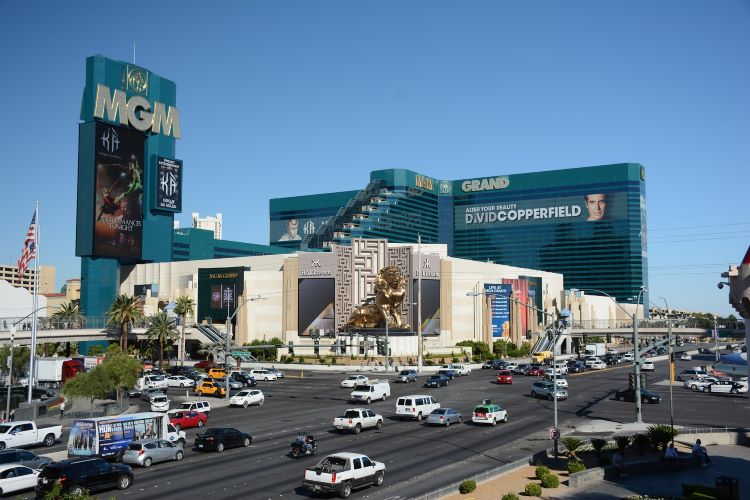 The MGM Grand also has one of the largest gaming floors in all of Las Vegas. The casino is measured to have 171,500 square feet and over 3,000 slot and poker machines. Table game enthusiasts will also feel at home in the casino with more than 200 table games and a great poker community.

The Caesars might not be the largest or the most flashy casino but it is without the doubt the most famous one. The casino offers a huge variety of entertainment and is well known to host some of the best performers in the world. The popular casino was moreover immortalized in the movie blockbuster – Hangover, starring Bradley Cooper and Zach Galifianakis, which made over $1.42 billion in the box office. 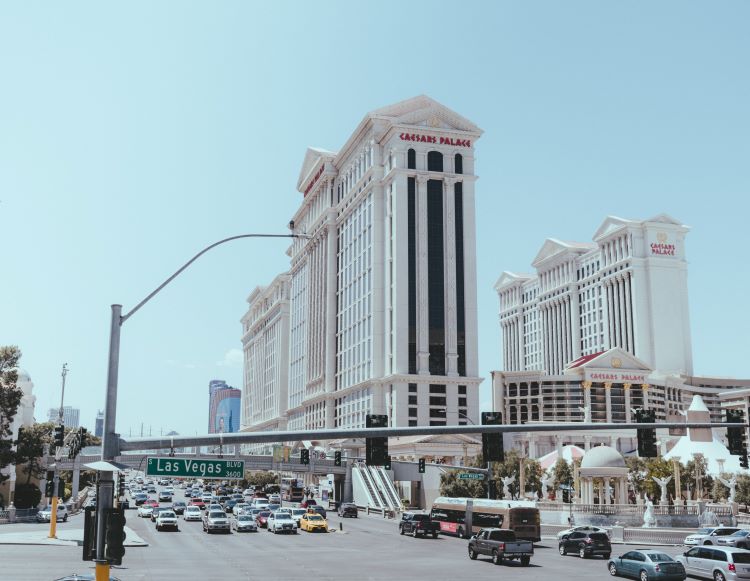 Designed and inspired heavily by ancient Roman architecture, Caesars Palace captures the colossal atmosphere of the empire perfectly. The casino has arguably the best pool area in all of Vegas, called the Garden of the Gods, which is open for visitors day and night. This massive pool oasis has multiple sections including a temple and a pool area themed after each Roman god.

The casino is another Italian-themed resort that is no less than magnificent. Every visitor is welcomed by the jaw-dropping fountains of Bellagio, which happen to be the largest fountains ever constructed. These iconic water streams are so powerful they would send an average man flying 5 feet upwards.

After passing the Bellagio fountains, you’ll be greeted with even more glamour as the lobby’s ceiling is composed of Fiori di Como, which is the biggest glass structure ever created, featuring more than 2,000 hand-blown glass flowers covering 2,000 square feet. 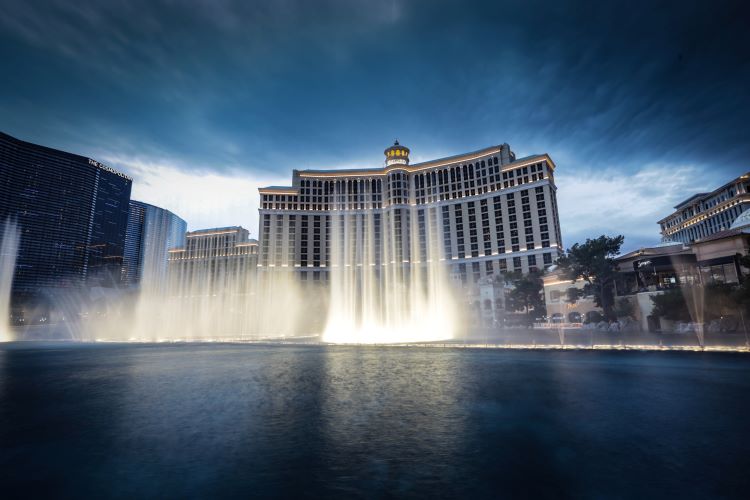 The place is the very definition of elegance. The casino and hotel’s interiors create a very homey atmosphere but with a modern approach. On the casino floor, you’ll find a great variety of gambling games ranging from slots, sports betting, table games, and some of the biggest progressive jackpot slots in Vegas that often exceed a few million in an instant payout.

The Tropicana has a special place on the Strip as it’s one of the oldest Las Vegas casinos still operating today. The resort has been a part of the Strip for over half a century, and it still maintains a distinct charm.

The casino is really more of a nostalgic experience as Tropicana features 1,467 rooms across 2 towers plus its bungalow wings that are almost forgotten in the Vegas culture today. In contrast to the 1950s when everything was done “bungalow-style”, this approach is very unique to Tropicana since very few casinos in Las Vegas feature them today. 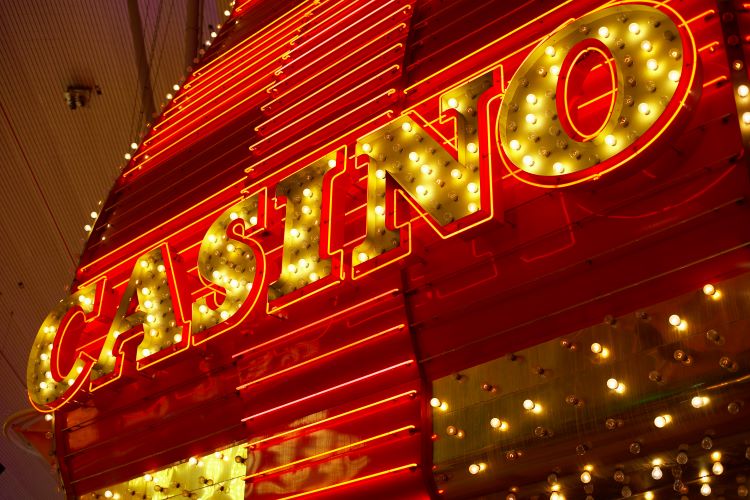 Compared to all the other giants in Sin City, the casino doesn’t have the most exciting gambling offer. Still, the decor and atmosphere are the opposite of noisy and hectic, which is why a lot of players may prefer it to something else.

The 3rd ever resort built on the strip, the Flamingo can be only described as extravagant with funky pink decor and an amazing atmosphere. Today, it represents the oldest establishment on the famous street.

The pink neon-lit casino has quite possibly the nicest and warmest outdoor area in all of Nevada. This is because it features a full-on wildlife habitat in its courtyard, filled with all kinds of animals. These include the obvious flamingos but also turtles, koi fish, and there were even penguins at one point.

Flamingo’s casino floor has 73,000 square feet of gaming space and features more than 1,600 slots and other classic attractions such as the Wheel of Fortune or a high stakes poker room. Like many other casinos starting back in the 50s, Flamingo was known to be run by mobsters like Bugsy Bugsy Siegel who even took over the final construction of the actual building. But today, the mafia in Las Vegas casinos has become a thing of the past. The place is now a perfect destination for a memorable family vacation with kids

Although Golden Nugget has been around for decades, it still keeps its hustle and bustle. This casino resort is always busy and as lively as ever was. The building has undergone renovation and expansions numerous times, giving it a sense of freshness and energy.

This is because back when the property opened in 1946, the casino did not feature a single hotel tower yet. Today, the Golden Nugget stands tall with 2,419 hotel rooms/suites and a 38,000 square foot gaming space.

The brand and image of the Golden Nugget were undoubtedly influenced and boosted by Frank Sinatra himself who performed at the hotel and shot several commercials promoting it. The resort and casino are extremely fancy while maintaining the old Vegas ambiance. You’ll find a wide array of classic gambling games but also table games, keno, poker rooms, and a race and sportsbook.

There is no doubt that each of these brands has become timeless icons that will remain in the memory of many people. However, the Las Vegas Boulevard casino scene has changed tremendously in the last decades. A large number of other renowned places have been closed or transformed so much that they no longer represent the same thing.

The focus of most casinos has shifted from just gambling to entertainment in general. Therefore, places like Macau or virtual casinos are becoming much more appealing to serious gamblers.