Home News Mega Moolah and A Night with Cleo Slot Review: Are They Worth The Hype?

Mega Moolah and A Night with Cleo Slot Review: Are They Worth The Hype?

When you ask “What are the most popular online slots?”, you’re bound to hear about Mega Moolah and A Night with Cleo. Both of these onscreen slots are fun and simple introductions to the world of online gaming.

But do they live up to the hype? And most importantly, when asking what slots are paying out, do they deliver? Read this review, and you’ll find out.

A Night with Cleo  – More Than a Basic Slot?

A Night with Cleo is a popular but slightly underwhelming 5 reel, 20 payline online slot game with an Ancient Egyptian theme lead by a sexy pharaoh named Cleo. It awards prizes for two to five matching symbols in a payline. But the biggest draw to this game is a slightly overrated striptease where Cleo seductively removes her clothing.

Interestingly, the bet sizes range from 20 cents to an impressive 200 dollars. So, is it better to play penny slots or dollar slots? Well, that depends on your bankroll, and the amount you’re trying to win.

A Night with Cleo is great because it gives you both of these options.

This slot offers a randomly awarded progressive Jackpots. It can be triggered with any paid spin and any bet size. As for which one is more likely, the Jackpot or your chances with Cleo, you could say they’re both within the same reach.

Also, 15 Free spins with the potential for a 3x multiplier are awarded for getting 3-5 scatter symbols anywhere on the reels.

A lot of players see the Free spins as the best and most underrated feature of this game. They’re the most likely thing to win, and they get you closer and closer to the famous gambling feature.

At first, you may be disappointed that there is no bonus game here. But a Double Up feature is basically the same thing.

Cleo comes up holding a lotus flower in each hand. If you pick the right hand, you double your winnings and Cleo removes another article of clothing.

You can activate this feature after every win, which makes it super convenient and fun to play.

Is Night With Cleo Recommended?

Winning the Jackpot in the Free Spins round while watching some mature content sounds like a slot dream come true, but maybe you’d prefer not to mix your hobbies if you catch my drift.

Keep in mind that, besides the Double Up “boob showing” feature, the game doesn’t offer as many additional bonus games as some other slots do.

However, if you’re all about the excitement of randomly triggered jackpots and enjoy the taste of nudity and seductive dancing, then spending a night with Cleo is a good choice.

Mega Moolah is the most famous slot machine built for online play. It’s more of an institution at this point. It’s a 5 reel, 25 payline slot machine based on an African Safari theme.

Generally speaking, the gameplay is simple and easy to follow, but the experience and the graphics are definitely overrated. It doesn’t matter too much, though, because this game is famous for the randomly triggered Jackpot which is far more important than the mediocre design. 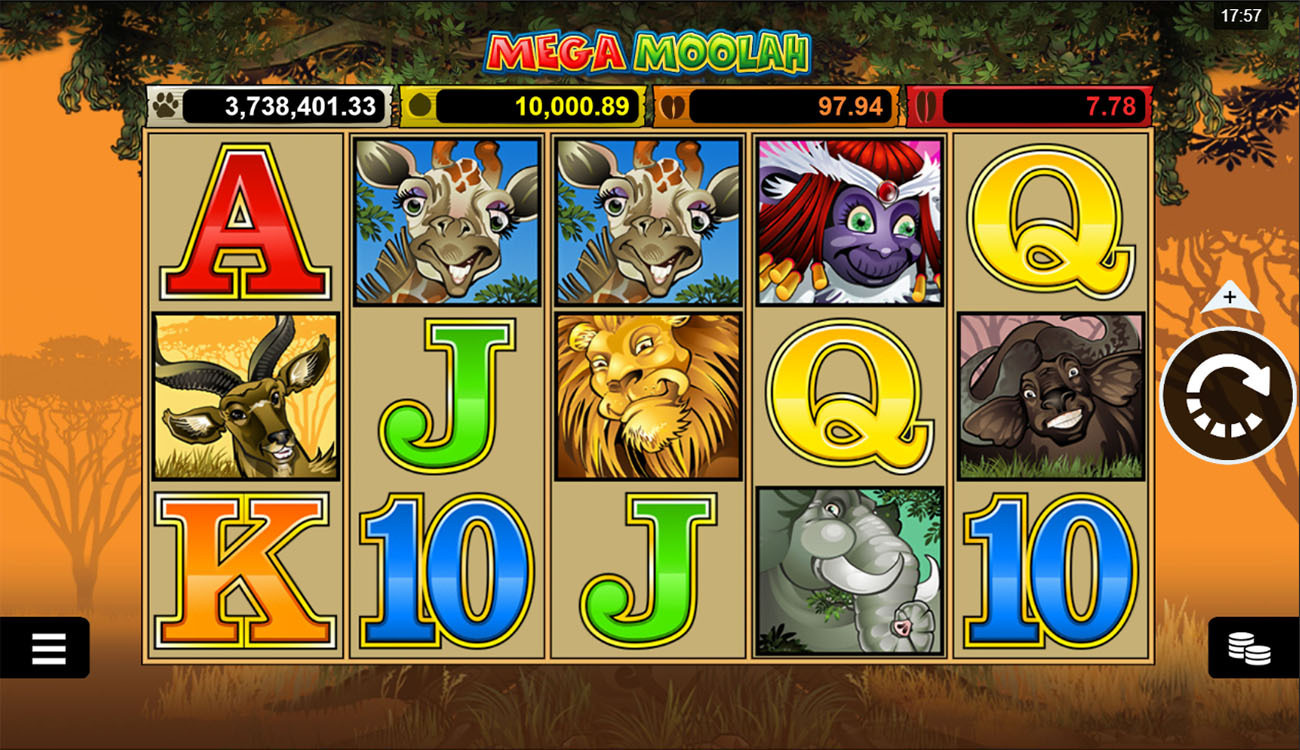 In Mega Moolah, bets range from 1 cent to 6.25 dollars. That makes it a Mega great game for everybody.

Aside from the Jackpot which is described a bit later, you have a Wild symbol, which is the Lion. The Wild replaces any other symbol in the game to form a winning combination. This is a cool feature because it tends to rack up wins a lot faster.

Mega Moolah’s greatest feature, though, are the four progressive Jackpots. This is what brings everyone to the game. To get the Jackpot, you have to land the right combination of symbols to trigger the Jackpot Bonus Wheel. One thing’s for sure, that the Jackpot wheel keeps you on the edge of your seat during gameplay.

Although there are 3 other Jackpots available, the “mega” one can reach the double-digit millions, making all the others seem like child’s play.

Regardless of the Jackpot sizes, though, does anyone actually win online slots? In short, yes. For example, in 2020, nine Mega Moolah Jackpot winners won over 78 million dollars, averaging about 8.7 million each.

While the Jackpots are what truly make this game, the truth is you won’t be winning them most of the time. You’re more likely to rack up Free Spins, which are often overlooked as an underrated feature.

You get 15 Free Spins by landing 3-5 Monkey symbols across the reels. And for every win with Free Spins, your win amount is tripled. These are always a nice touch because they kept the game moving with just enough momentum.

Is Mega Moolah A Worthwhile Slot?

In the end, it’s a toss-up. Even though the graphics may be uninteresting, this is the type of game you play for the big win, not for an immersive 3-D gaming experience.

Having said that, if you’re not shooting squarely for the Progressive, honestly there’s no reason to be playing this game. With an RTP of only 88.12%, there are plenty of other games that offer more frequent wins and equally large betting ranges.

However, multi-million dollar jackpots in Mega Moolah should be enough incentive to at least try it out. Who knows? The next Mega Moolah Millionaire could be you.

Final thoughts: Are Mega Moolah and A Night With Cleo Overrated or Not?

Mega Moolah and A Night with Cleo have so far in 2020 had individual payouts of over 14 million and 590 thousand dollars respectively. There should be no reason why 2021 would be any different.

Looking at the basics, the excitement they offer, and the potential winnings, the differences between the two are not big.

From the odds slot perspective, A Night with Cleo with an RTP of 92.5% is probably a better choice than Mega Moolah with a low 88.12%. But again, the historical payouts of Mega Moolah certainly have the “WOW factor”.

Now that you’ve heard how they are, try the games out for yourselves. Is there a trick to slots? Maybe not a trick, per se. Focus on choosing a game that you find interesting, and adopting a slot machines strategy that works with your bankroll. The rest will take care of itself.

The only thing that’s for certain, is that if you don’t play, you can’t win. So why not give it a shot!