Red Tiger, an iGamig provider working under the wing of Evolution Gaming, has announced that they are launching the first NFT-based slot game – NFT Megaways. Inspired by the crypto-boom, Evolution has bought 4 CryptoPunks earlier this year and these unique art forms are featured in this groundbreaking release that landed on the market on Thursday, September 9, 2021.

As stated by the studio, these are some of the earliest examples of NFTs (non-fungible tokens), and the proof of ownership is stored on the Ethereum blockchain. Todd Haushalter, Evolution’s Chief Product Officer, said:

“At Evolution, we have a long record of innovation and being first with distinctively different new ideas. With all of our group brands, our goal is always to offer players the most feature-rich and vivid gameplay possible.”

All About NFT Megaways Slot

CryptoPunks 914, 3008, 4701, and 8143, 4 unique characters created by Larva labs, are at the core of the NFT Megaways slot. The game provider has also included one of the most popular slot features – Megaways mechanic.

The action takes place on a main 6-reel grid and 1 horizontal reel with 4 holding positions located above the grid. Rated 5/5, this is a highly volatile game with up to 200,704 ways to win. And not only are these reels ground-breaking, but they are also quite powerful with 10,500x the stake as a max payout.

Visually, the release is reminiscent of 8-bit retro computer games and features a fun, old-school soundtrack. Thanks to the megaways feature, players get a chance to create some amazing winning chain reactions. As always, winning icons are removed and replaced with new symbols, creating a possibility for another rewarding sequence.

4 CryptoPunks symbols represent Wilds that appear only on the horizontal reel above the main grid. Aside from substituting for all regular playing symbols, when they are included in the winning combo with low-paying symbols, CryptoPunks start collecting them. Each symbol collected increases the CryptoPunks’ multiplier by 1.

However, when they create a win with high-paying symbols, they are removed from the grid with the rest of the winning symbols. Also, only 2 CryptoPunks can be visible on the grid at the same time and in that case, their individual multiplier values are capped at 30x. 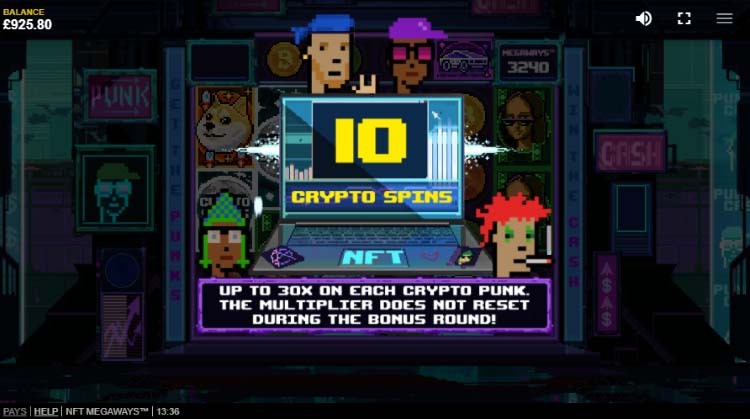 To trigger the Free Spins bonus round, a player needs to land at least 3 Crypto Spins symbols aka Scatters. Depending on the number of Scatters landed, the bonus round contains 10, 15, 20, or 25 Free Spins. When it starts, 4 CryptoPunks multiplier meters are added on the side of the grid. During this round, the multipliers don’t reset until the bonus game ends but they will stop once they hit 30x. Also, this is a retriggable bonus round and players can get up to 20 additional spins.

Riding The Tide of iGaming Innovation

Evolution Gaming has been at the forefront of iGaming for quite some time now. The studio has shown through the constant expansion of its high-quality portfolio that they are always looking for a way to push the industry borders in creative and entertaining ways.

“Players have the chance to be a part of history in the making. As a game, it’s going to appeal to lovers of slot games everywhere, as well as bringing in those crypto fans who want to see a new way of using this CryptoPunk artwork.”

By combining NFTs and video slots, Evolution’s Red Tiger has put itself in a unique position, becoming a part of crypto-asset history.