Reels Are Burning In ‘Fire Strike 2’ Slot By Pragmatic Play

Lightning maybe doesn’t strike the same place twice, but the fire does. At least according to the Pragmatic Play’s newest release Fire Strike 2, the sequel of the same-named popular slot launched in 2019.

With added features and enhanced graphics, the new game is vibrant and quite easy on the eyes. While the original looked like a fairly regular flaming fruit machine it was packing a surprisingly massive winning potential of up to 25,000x, kept in the sequel as well. 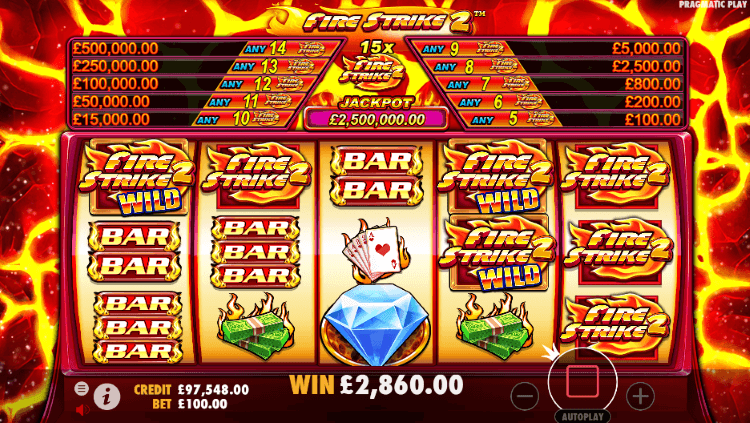 Launched just days after the provider’s North Guardians slot, Fire Strike 2 is an explosion of a good time and exciting features. Played on a 5×3 grid with 10 paylines, the slot offers medium volatility gameplay you can try in the real money mode from €0.10 bet per spin.

Symbols are familiar, with few tweaks and all illuminated with flames. Starting from the lower values and moving up, there are dice, cards, chips, banknotes, bells, BARs, double BARs, triple BARs, blue 7s, pink 7s, and red ‘sevens’. Still, the biggest wins produce the Firestrike Wild with payouts on its own going up to 200x the stake.

On the contrary to the original release, Fire Strike 2 comes with free spins round and other added special features. However, the goal remained the same – land as many Firestrike bonus symbols or Firestrike Wilds possible to collect an instant money bonus.

Hitting 6 or more of either of these symbols anywhere on the grid produces an instant cash award from 1x up to 5,000x the stake. In addition, if the screen gets covered in precisely 15 Firestrike Wilds, the max jackpot value of 25,000x the bet is won instantly.

Diamonds are representing Scatters and three of them appearing together on reels 1, 2 and 5 trigger 12 free spins. For the most part, this round doesn’t differ much from the base game, except that you need one less money symbol to win instant cash prizes.

Also, whenever bonus symbols land on a free spin, there’s a chance for them to remain sticky for the rest of the feature. That’s quite a benefit since 15 Firestrike or Firestrike Wild symbols award a 25k jackpot. To make things even better, the extra 12 free spins are awarded if another batch of three Scatters hit during a free spin at the same time.

With all these interesting additions to already thrilling gameplay, Fire Strike 2 slot is more than worthy of the player’s attention. Pragmatic Play is known for making high-quality titles, each better than the last one and this one is certainly not the exception.