Another stream, another great win for Roshtein! The most famous online casino streamer hit a six-figure win yet again. This time, it was during the bonus battle where the star of the show was the Big Bamboo slot by Push Gaming that produced an astonishing $1,254,060,00 during free spins.

As a cherry on top, this came right after Roshtein broke his record by winning over $17m in the Wanted Dead or A Wild slot. In this edition of the bonus battle stream, Rosh opened all of the 4 options available via the Buy Bonus feature over and over again. He had some nice wins along the way until the game finally paid out a big chunk of its potential, amounting to over $1.2m.

It also provides the chance of purchasing one of four bonus modes, and that’s exactly what Roshtein was doing in his latest stream. Since the cost of buying the bonus is quite steep, he reduced the bet per spin from $400 to $100 which makes the $1.2m win even more impressive.

Rosh selected the third bonus buy option that brings 8 to 10 free spins with 4 converted symbols. The bonus round didn’t go so well from the start, as the neverending coper symbols landed on reels spin after spin. 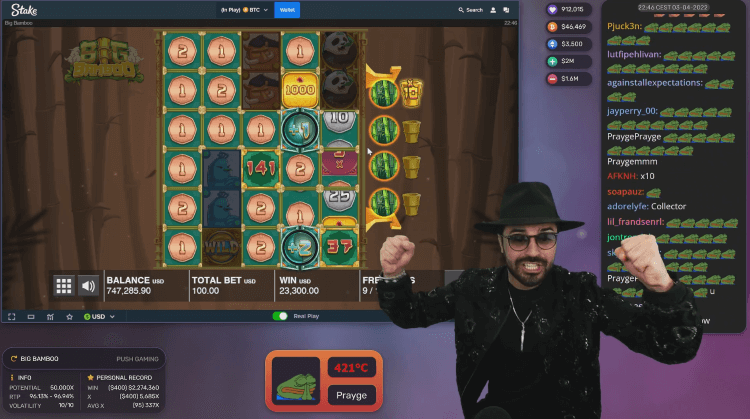 Luckily, the final spin came with a panda respin, followed by three additional free spins. However, the respin was more than enough to make the elusive collector finally appear with an award of $1,221,000. Two final free spins resulted in another great win, raising the total amount to $1,254,000.

Although quite impressive, this barely made the streamer even, as he opened a lot of bonuses in this game before hitting this win. Still, Rosh had a positive take, saying that Big Bamboo has “finally given something back from all those bought bonuses”. In the end, this was yet another highly entertaining session that showed once again why he is the king of online casino streaming.