The leading casino streamer Roshtein managed to win the max prize on a legendary Pragmatic Play video slot – Fruit Party. While spinning these fruity reels on a $500 bet, he landed a whopping $2.5 million win in one single spin and broke the world record. The slot-winning potential is limited at 5,000x and that’s exactly how much he got this time.

Needless to say, this event took him by surprise and he needed a couple of seconds to process what exactly happened. What made the whole situation even more unbelievable is that it happened during the base, not the bonus game. But thanks to the mighty multipliers on some high-paying symbols, he was able to increase his balance by millions.

Roshtein kept repeating “Oh my God!!!” because, let’s be honest, what’s there else to say in a situation like this. This is not his first big win on a Fruit Party as he already had wins reaching several hundred thousand dollars but this one – this one is certainly the one Rosh and his loyal followers will never forget. Until this moment, the leading slot in his popular casino streaming sessions was Book of Shadows by Nolimit City.

Gates of Olympus, another Pragmatic Play slot, got Rosh jumping up and down from joy. While playing this first-rate Greek-themed release, the mighty Zeus unleashed his lightning and sent the 250x multiplier to the slot grid, helping Rosh win stunning $1.4 million. But now, with $2.5 million on Fruit Party, he was able to reach completely new casino streaming heights, setting the ultimate personal best result and breaking the world record. 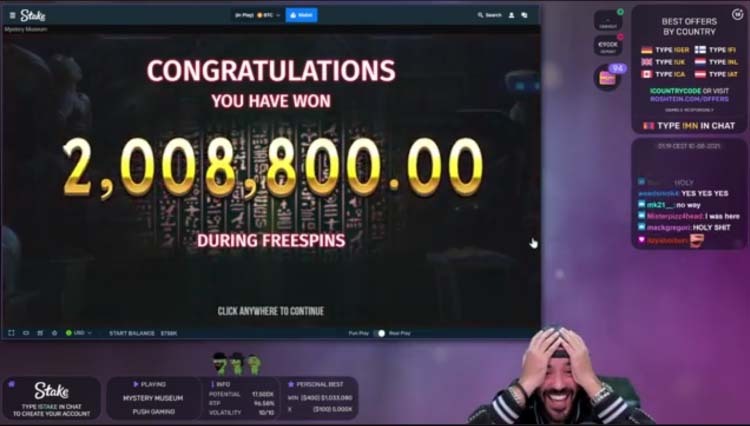 Mystery Museum slot by Push Gaming is one of the most popular games in the casino streaming community on Twitch. The release is known for its sophisticated and engaging gameplay, great visuals, and amazing winning potential of 17,500x the bet. During the 8 free spins bonus round, Roshtein got the full screen of Pharaohs, the top paying symbol in the game. This led to a stunning Є2,000,000 win in one single spin and Є2,008,800 in total at the end of the free spins bonus.

Pragmatic Play is one of the best software providers on the iGaming market with an extensive portfolio of modern and entertaining slot games done by the latest industry standards. Among the releases that stood out the most is also the Fruit Party slot with great visuals and even better bonus features.

The game comes with a winning potential of 5,000x the bet and an RTP of 96,47%. The tasty action takes place on a 7×7 grid and instead of paylines, players have cluster pays mechanic at their disposal. The volatility is set at medium so players can expect a decent hit ratio. 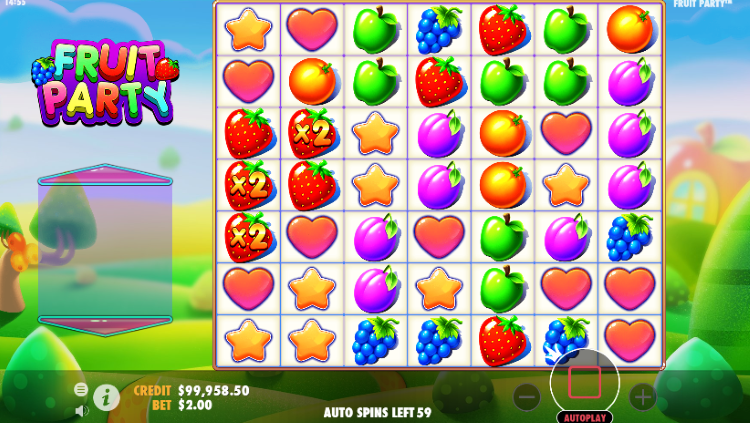 What makes big wins possible are the multipliers that appear at random during both base and bonus games. Most players can look forward to is amazing multiplier value of 256x which can lead to an impressive payout. There is also a Free Spins round that’s triggered by landing 3 Scatter symbols. Players are rewarded with 10 Free Spins during which can be retriggered and depending on the number of Scatters won, they can receive up to 12 additional spins.