Pragmatic Play is one of the busiest providers of premium iGaming content. The brand releases up to 5 new slots every month, so it’s no wonder why participants in many episodes of slot wars are games by this developer. That’s the case this time when Big Bass Splash challenges Cash Patrol to a duel.

Start the slot war, let’s see who the winner is!

There are many things that are important to players when deciding which slot to try out, but the winning potential is at the very top. Played on 5×3 grid with 10 paylines, the fishing-themed slot provides a maximum prize of 5,000x the bet.

Cops chasing bandits on reels comes with the same 5×3 grid setup, but offers 25 paylines. Despite its medium volatility, the higher number of ways to win enables a massive winning potential of up to 10,500x the stake. 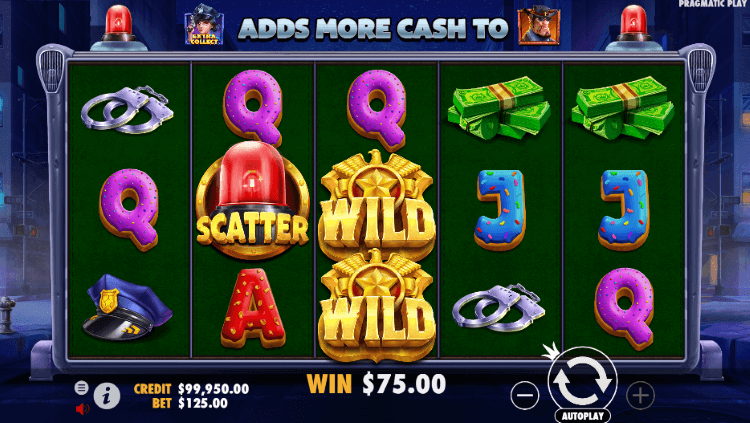 When it comes to RTP, the percentage is quite similar. Big Bass Splash comes with an RTP of 96.71%, while the Cash Patrol features an RTP of 96.5%. While the fishing bonanza has a slightly higher return to player percentage, the winner of this battle is clear – it is Cash Patrol thanks to it’s more than double maximum winning potential.

When it comes to special features, these two games don’t differ much one from another. In Big Bass Splash, the action really kicks off during the bonus round. It is triggered when 3, 4 or 5 Scatters land together, awarding 10, 15 or 20 free spins.

However, if only two Scatters land, there is a chance for a hook to appear and fish out another Scatter onto the reels. Another scenario is that Scatters move one position down if there isn’t a risk of falling of reels, triggering a respin for all the reels except the ones containing Scatters. 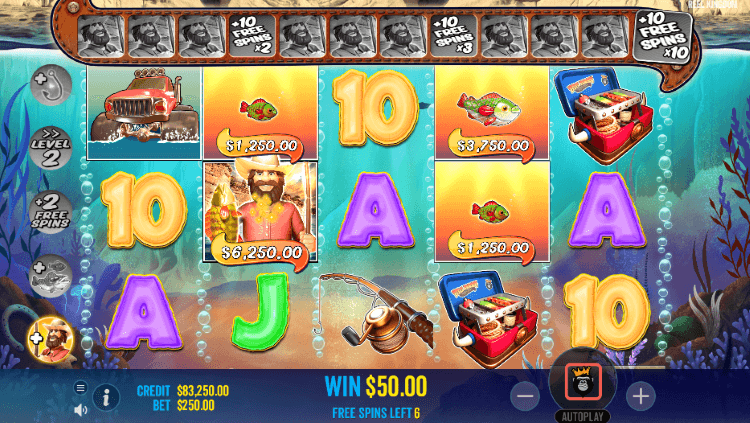 Before free spins start, up to 5 modifiers are randomly selected. If the Wild lands simultaneously as Money Fish symbols, it collects their value, while the Wilds themselves are collected at the progressive bar with 4 levels above the reels. Every 4th Wild collected retriggers the feature, awarding 10 more free spins and the multiplier for money symbol collection increases to 2x for the second level, 3x for the third level and 10x for the fourth level.

Three more random features can trigger during free spin if either fisherman Wild stands alone without any fish to catch or vice versa. Depending on missing symbols, you might get money symbols or Wilds added to reels, or a bazooka animation can appear and change all the symbols from the screen except Wild to something else.

As said, Cash Patrol has many similar features, starting with Money symbols. Here Money symbols can land on reels 1 to 4 displaying a cash value, while the final fifth reel is reserved for the Collect symbols.

Represented as cops, there are 5 types of Collect symbols, activated when they fall on reel where at least one Money symbol has already landed. Different Collect symbol type triggers different valuable modifier that rises the fun factor to the roof. 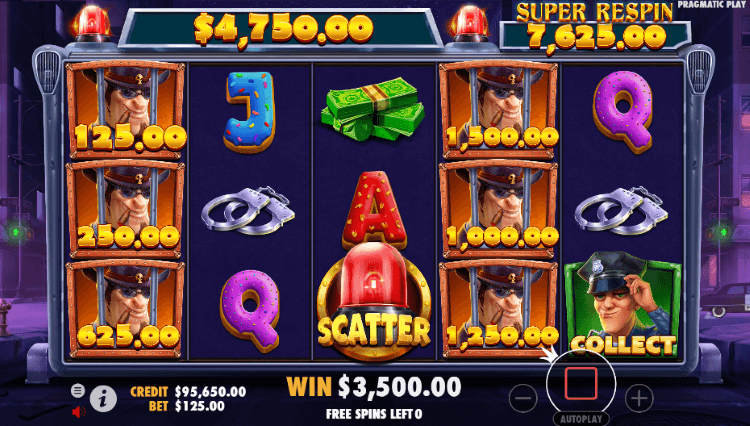 The bonus round is activated when 3 Scatter land together, awarding 8 free spins. When Money symbols land during free spins, they are stored in a special Bonus Pot.

Both games have very strong bonus features, already known to the fans of Pragmatic Play’s slots. Since the ones in the Cash Patrol pay off better, this slot is a winner of this section, but by a hair split.

As the fishing-inspired slots are here for a while and reckoning of the police forces with criminals isn’t unseen as well, the themes of these games are equally interesting. None of the games is a revelation when it comes to original backstory or visuals, but a remake of already existing genres that players know and love.

Both games have a cartoonish design, but Big Bass Splash seems to have more polished look. Still, that impression might be because of its colorful background, transparent reels and vibrant atmosphere. On the other hand, the police chase on reels is taking place at night, making the slot a bit darker, yet nice looking weather way.

The level of graphics is as expected from this provider – superb. It is the same when it comes to animation, so it was another hard choice to decide the winner of this category. Everything considering, Big Bass Splash has slightly more animated parts than its rival, so it takes the win. 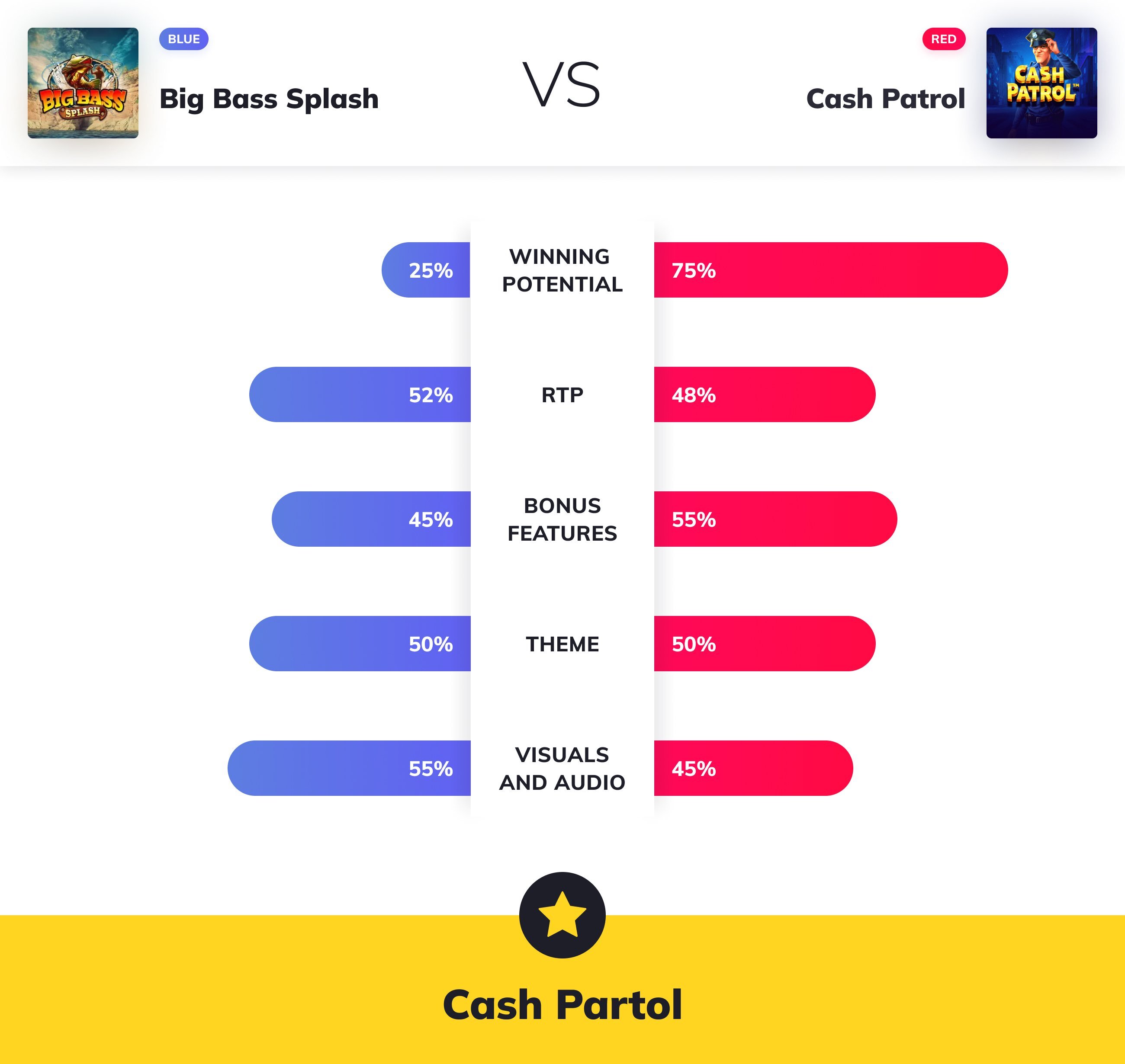 Pragmatic Play once again delivered two great games that are hard to compare as they are similar in many senses. However, the winning potential in Cash Patrol is higher for more than a double than in Big Bass Splash and that’s the main reason it came out as a winner of this episode of slot wars.