The slot wars are continuing and this time you get to witness the showdown between Pragmatic Play’s premium slots Big Juan and Star Pirates Code. Let’s see if the cheery mariachis have what it takes to defeat the mean pirates.

Pragmatic has given both slots powerful reels but Big Juan, with a winning potential of 2,600x the bet, has a slight edge over Star Pirate Code where max win is limited at 2,500x the stake. So, players can expect some hefty wins while they hit the spin button on either of these games. If they’re lucky!

The provider has also pumped the RTP up so players get the chance to enjoy 96.70% RTP rate in both releases. No doubt, this is on the higher end of the industry standard. In terms of winning potential and RTP rate, games are pretty much neck and neck.

This is the round where Big Juan really dominates the Slot Wars ring. While designing Star Pirates Code, the provider decided not to include free spins as the bonus game. Instead there is a Respins feature with Wilds and Multipliers. The Compass symbol landing on the middle 3 reels triggers the feature and  the Wild spread in the direction Compass is showing. The respins can be retriggered with the new Compass symbol appearing on the grid and if the new Wild overlaps with the old one, the multiplier gets activated.

The Big Juan slot is bringing much more in terms of extra gaming perks. In the base game, if 6 or more matching regular symbols appear on the middle 3 reels, the Wild Switch feature starts which turns all those symbols into Wilds. The game also gives players a chance to trigger up to 15 free spins (depending on the number of Scatters landed). Pragmatic really ensured the bonus round brings players a special and unique experience.

First the grid is reduced to the 3×3 format while the 4th reel, holding only one position, has a special role. Before the spins start, the Bag of Coins symbol is placed in the middle of the grid and remains sticky until the feature ends. At the beginning of the round, the Bag is holding the bet amount but this amount can increase thanks to the Boost symbol. Aside from this, the bonus grid also shows 4 types of jackpots (Mini, Minor, Major, and Grand), cash prizes, and Extra Spin icon. Thanks to the last one, players can end up getting much more than a designated max number of spins.

Being the leading software provider in the iGaming industry, Pragmatic knows it’s important to give players an overall immersive playing experience if you want them to keep coming back. This is why visual and audio effects are a very important part of the game designing process. Both of these releases come with amazing graphics, great animations, and interesting themes but Big Juan just seems a bit visually sharper and audibly more immersive. The studio was able to capture the essence of the Mexican fiesta and transfer it to the reels flawlessly. 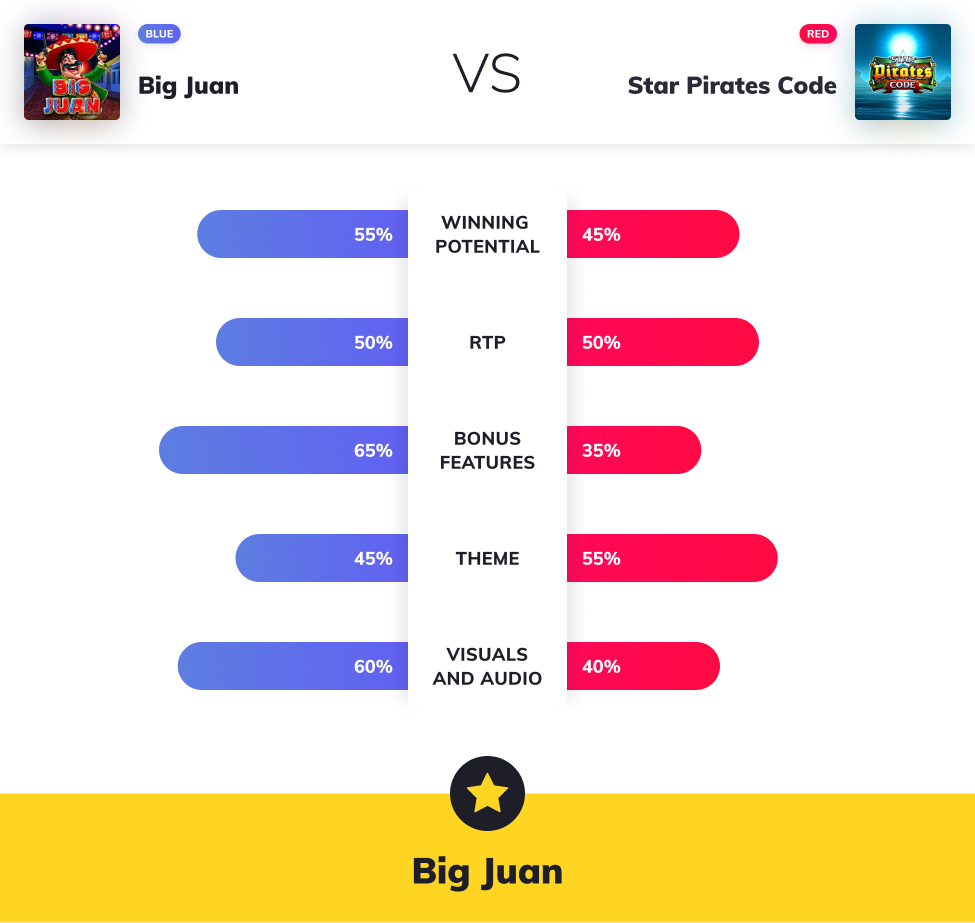 The title of the winner in this slot wars episode goes to Big Juan. The games pretty much match when it comes to popularity of the themes that inspired them, the winning potential, and RTP rate. However, what makes the Big Juan game really stand out compared to the Star Pirate Code is amazing free spins round.

Although both releases have a pretty unique bonus gameplay, the one appearing in the Big Juan slot is more exciting and brings many options for winning hefty prizes. The fact that free spins can keep lining up as long as players land the Extra Spin symbol. Also 4 fixed jackpots are also waiting for the lucky players and what’s even more, they can win them more than once in the same round.