Home News Slot Wars – Black Bull VS Down The Rails

Slot Wars – Black Bull VS Down The Rails

Pragmatic Play presents two latest great games from its collection of premium slots – Black Bull and Down The Rails. It’s time to see what makes them tick and more importantly – which one will be the winner of this epic slot battle.

It is time for another episode of slot wars, let’s go!

With a 5×4 grid and 20 paylines, Black Bull has one row more than its rival. This allows it to generate a winning potential of up to 4,500x the bet.

Although one row short, the 5×3 slot Down The Rails has the same number of paylines. However, it boosts with a maximum possible win of 5,000x the stake, making it victorious in this round. 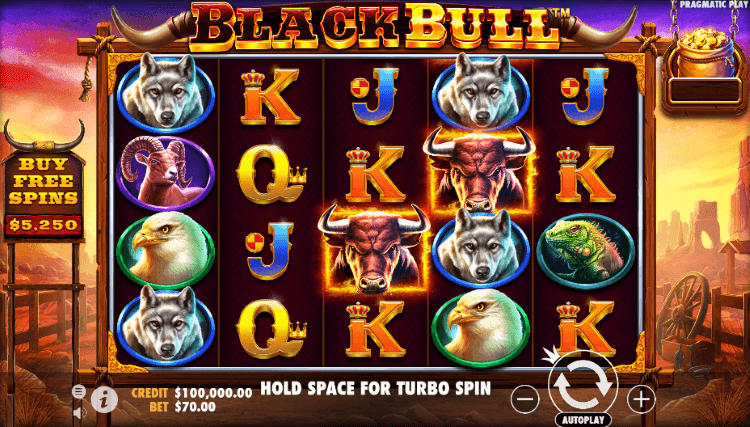 When it comes to wagering, Pragmatic Play has set the same range for both games. Players can start to enjoy the real money play by setting a bet per spin anywhere from €0.20 to €100.

Another thing that’s exactly the same is the RTP of 96.51%. While a bit higher in the Down The Rails slot, both releases have volatility at a very high level.

A bag full of golden coins represents the Wild in the Black Bull slot, while the golden bull coin is a Money symbol that appears with a random value of up to 50x the bet. These symbols change the gameplay when they land together, as Wilds collect the values of Money symbols in view while also substituting for all regular symbols.

New Money symbols that land during free spins add their values to the collected amount, while Wilds award the currently gathered value as they hit. In addition, each new batch of 6 Money award 2 more free spins, prolonging the feature. The free spins round can be purchased via the Buy Bonus feature. 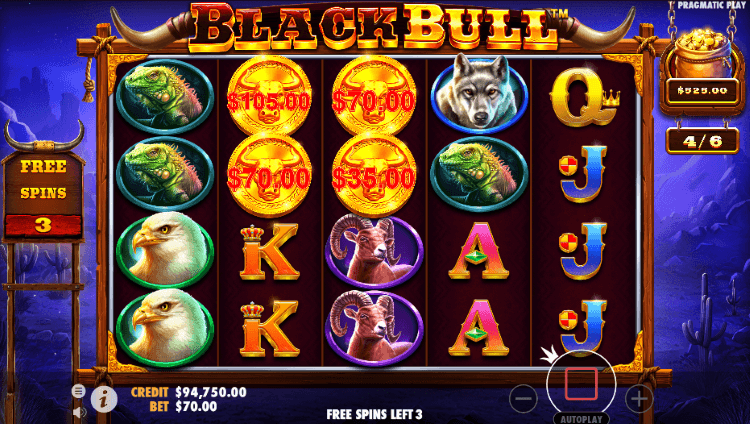 In comparison, Down The Rails has significantly more special features. To start off, there are 4 random modifiers that can activate at any time:

Landing 3 or more bonus symbols trigger the bonus round and one out of 5 free spins modes with different modifiers activates randomly. The player gets to choose to either play the currently awarded mode or gamble for a chance to get a different one. 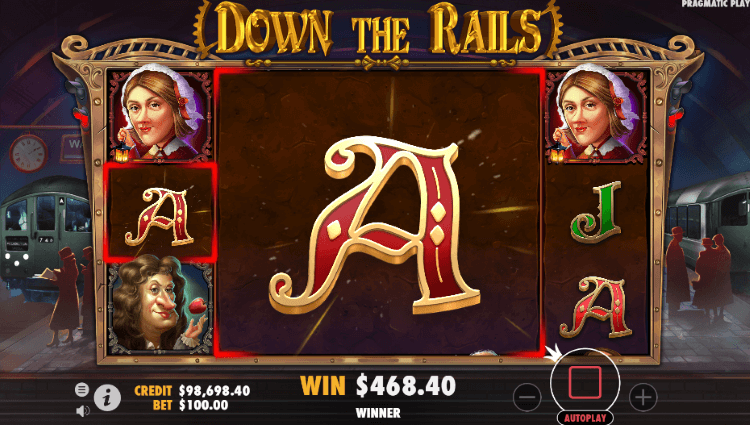 If the gamble is lost, instead of free spins a random mystery prize of up to 24x the bet is awarded. The End Of The Line mode is actually a Hold&Respin feature with money symbols, special extra life symbols, prize boost, expand and multiplier symbols.

Although Black Bull has a bonus round that spices the gameplay, it can’t beat numerous features found in the Down The Rails slot. With so many interesting modifiers that can activate at any time and 5 different spin modes, it is clear who is the winner of this round.

Black Bull is an American nature slot full of wild animals and dreamy landscapes, intertwined with subtle elements of the Wild West. While not quite original, the theme is executed beautifully. Besides the majestic bull that is the highest paying symbol and the protagonist of the game, there are snakes, eagles, wolfs and other animals.

On the other hand, Down The Rails takes you on a wild ride through London’s subway. It’s hard to pinpoint when the story takes place as people that have marked the different eras appear together on reels – Henry VII, Churchill, Shakespeare, Sir Isaac Newton and Florence Nightingale.

While may be confusing at first glance, things soon fall into place when you realize that the game is an homage to British history. This historic mixture makes the theme innovative, while the unusual design of symbols complements it completely.

Both visually and gameplay-wise, this history train is bursting with originality. Due to its uniqueness, it takes the point in this round as well. 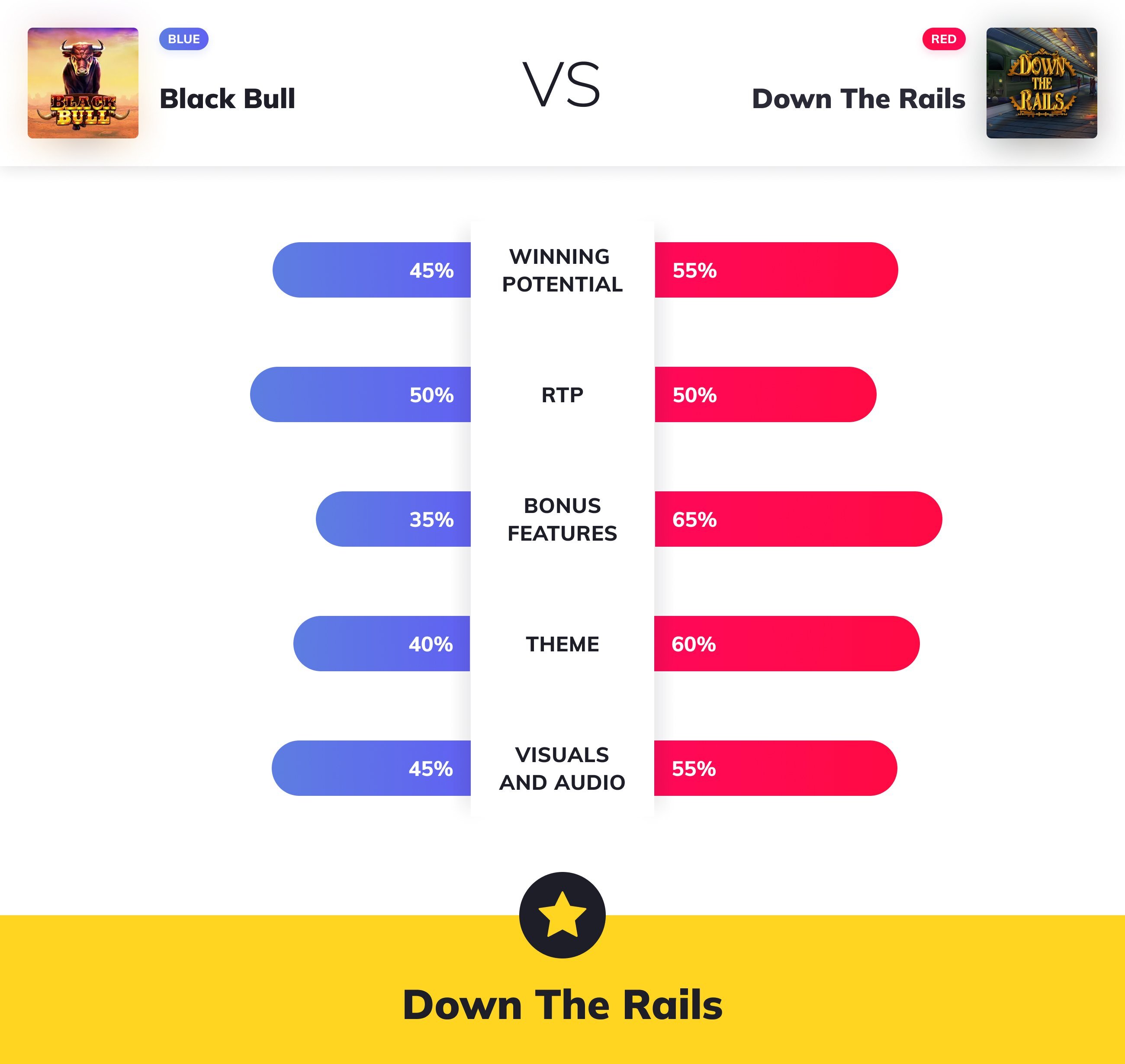 Black Bull slot is a great slot with interesting gameplay worthy of the player’s attention. However, there can be only one winner of the slot war and that honor this time belongs to Down The Rails. Thanks to its numerous special feature, unique visuals and original theme, this amazing slot has risen to the top in this battle of slot wars.