In this episode of slot wars, you will witness the epic battle between two Pragmatic Play slots released just a few days apart in May 2022. The Great Stick-Up brings you back to the 60’ with its crime-oriented theme, while Cleocatra takes you even deeper into the past in Ancient Egypt run by cats.

Do kitties have what it takes to take the win or organize crime will prevail? Let’s find out – start the slot war!

Many things are important when you’re browsing for new slots to try out, but the winning potential almost always comes at the top. Playing with your own money always comes with a risk, so better potential makes any game more attractive.

Whether you choose to visit the kitty version of Ancient Egypt or to join the infamous gang, you’ll encounter the same maximum prize of up to 5,000x the stake. Although it should be pointed out that the first release comes with a bigger playground – a 5×4 grid with 40 paylines compared to a 5×3 grid with 20 paylines. 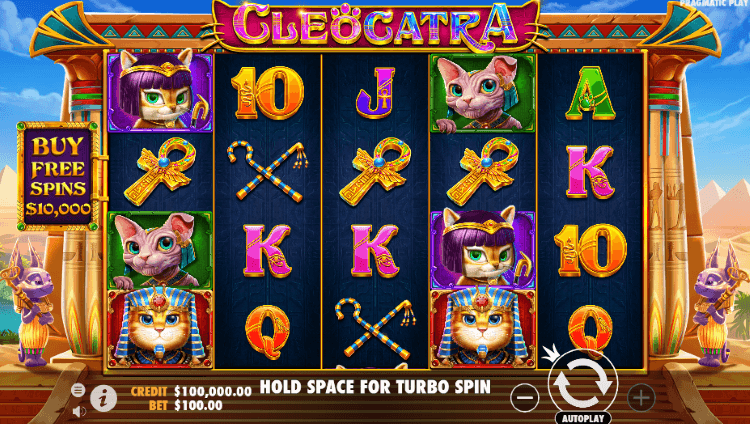 Since the wagering starts at €0.20 per spin in both titles, players with different budgets can enjoy playing them in real money play. These two Pragmatic slots come with high volatility, ranked 5/5 on the provider’s scale.

This leads to the RTP, which in Cleocatra is 96.20%. However, The Great Stick-Up has a theoretical return to the player of 96.30% making them almost equal. Even the biggest nitpicker will let such an insignificant difference slide and call a tie when it comes to this segment.

It can’t be said that these slots are the gem of originality when it comes to bonus features. There are no innovative game mechanics and extra rounds are quite common. Still, their combination with other elements does give a gameplay a fresh spin.

The Great Stick-Up bases its gameplay around free spins round, triggered when 3 or more Scatters land simultaneously. This action awards 7 free spins where a new sticky Mystery symbol makes the appearance, along with a progressive feature. 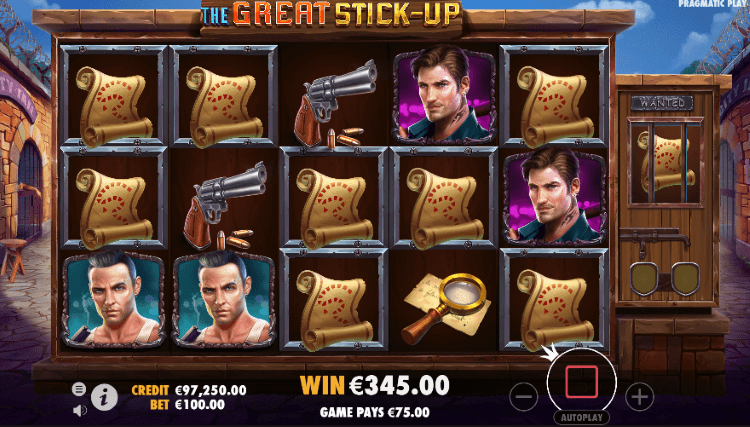 Any sticky Mystery symbol that lands during free spins remain in the same position for the entire feature. What’s special about it is its ability to always open and reveal the symbol type displayed in a box located to the right of the reels.

Also, in this bonus round little overlay symbols can randomly land on any normal-sized symbol. Collecting 2 of them upgrades the Mystery symbol to the higher-paying symbol type and awards an extra free spin in the process. When it reaches the status of the highest paying symbol, the progression feature ends and can’t be triggered again. 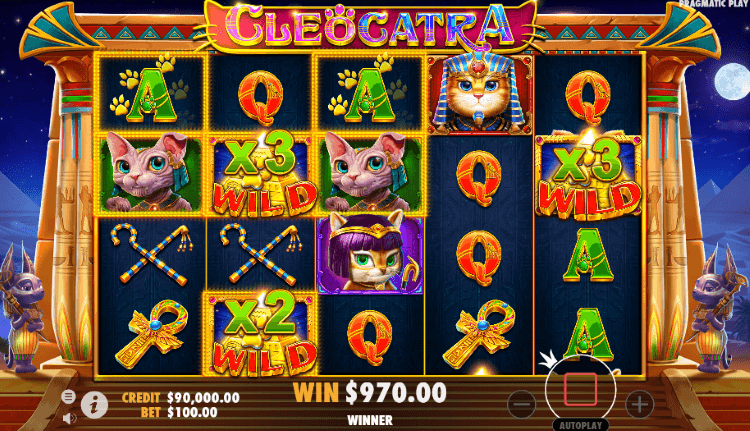 Cleaocatra slot also has free spins in addition to a respin feature activated when a full stack of cat symbols lands on the first reel. All matching cat symbols or Wilds in view are locked into positions while others are respun. This continues until a winning result occurs.

Scatters are represented as paw symbols in this slot and when 3, 4 or 5 land together 8, 12, or 16 free spins are awarded respectively. Any Wild landing on any reel but the first one during free spins remains sticky until the end of the bonus round. Wilds appear with 2x or 3x multipliers, while a full stack of cats on the leftmost reel adds 2 extra free spins to the remaining amount.

As you can see, both of these slots have the bonus features of similar strength and entertainment factors. However, the cat queen adventure has something extra that the robbery-themed game is lacking – an option to buy a bonus for 100x the bet. This gives it a slight advantage needed to come victorious in this section.

There’s no doubt about Pragmatic Play being one of the most consistent providers when it comes to graphics and animation in its slots. These elements are always at the highest standard and these games aren’t an exception.

However, the visuals are quite different because the themes of these releases have nothing in common. The Egyptian theme with its most famous queen as the protagonist has been revived in countless titles.

It’s safe to say that one of the most popular online slot themes started to blow over and even bore players when Cleocatra popped up. While you’ll see some of the familiar symbols, Pragmatic managed to make this theme refreshing by going completely feline and making cats the stars of the show.

This gave the game a vibrant, but the slightly comical view. Quite the opposite of visuals seen in crime-themed The Great Stick-Up set in some small American town in the 1960s. The second slot is the winner in this category due to its more original theme and detailed visuals that follow it. 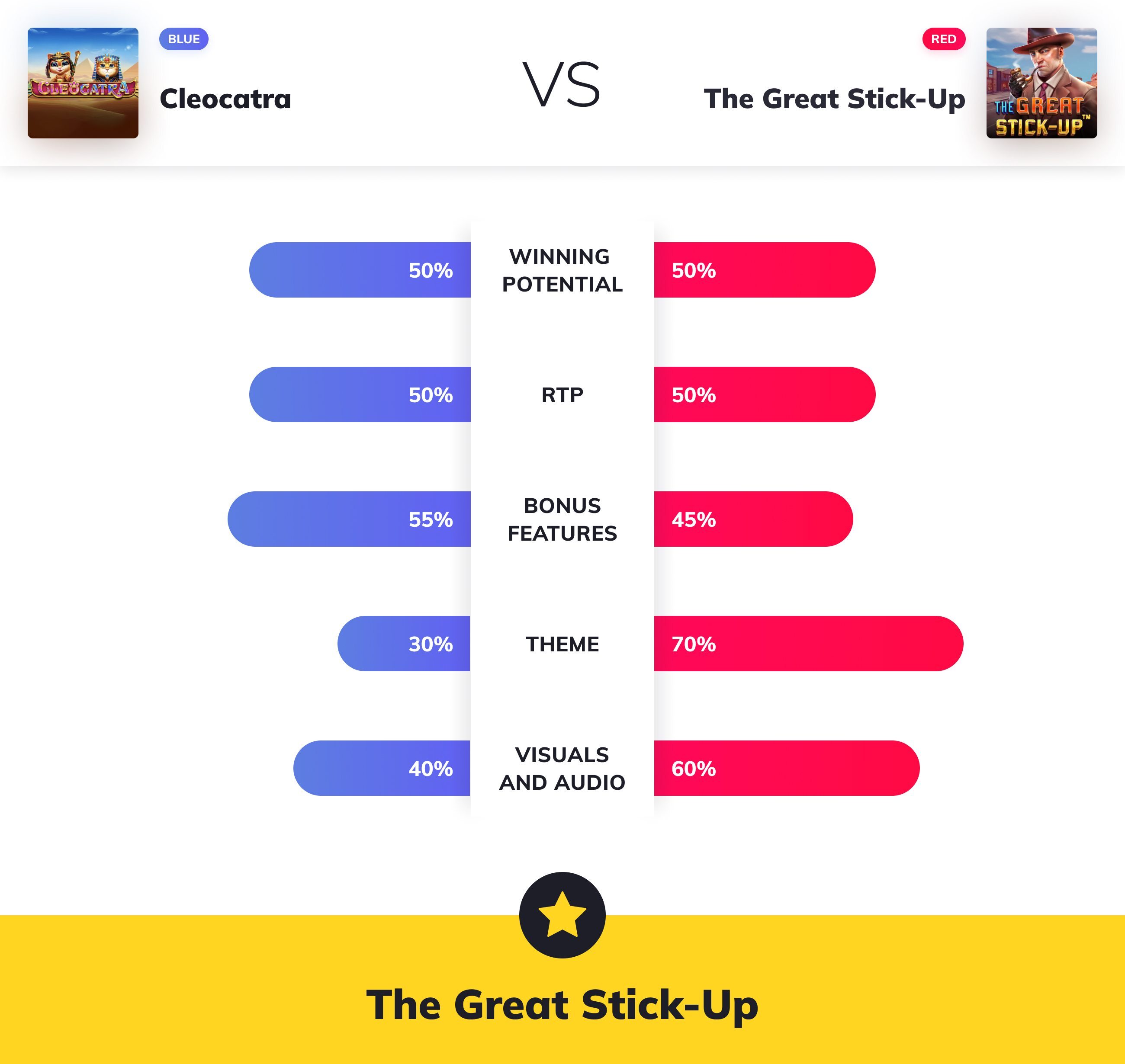 It’s not easy comparing two slots completely different at first sight. But when you scratch below the surface, you can see that gameplay doesn’t differ as much. So, The Great Stick-Up slot is the winner of this edition of slot wars solely because of its theme and more elaborate visuals.

Cleocatra certainly has its charms and provides the same winning potential and great playing experience, so if you like it appearance more, don’t hesitate to give it a try. All in all, both releases are quite worthy of the player’s attention and fit perfectly into Pragmatic’s portfolio of premium slots.