Drums of war are pounding, announcing the beginning of yet another slot battle. In one corner is the Dr Toonz slot, while Hotel Yeti-Way is warming up in the opposite one. Both releases come from the product line of the esteemed casino software provider, Play’n GO, but the main question is – which one is better?

While some other features might prevail, winning potential is something that most players first check in a slot. In some cases, it’s a breaking point when deciding in between two slots. After all, even the most entertaining slot with an abundance of bonus rounds can be deemed as unworthy of the punter’s attention if the maximum wins are way below the average. 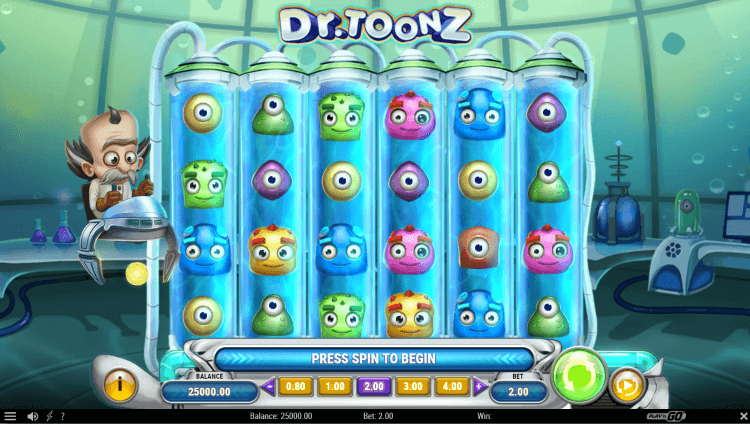 Launched in September 2021, Dr Toonz stands out with the massive winning potential of up to 22,000x stake. But his rival in this slot, released in July of the same year, Hotel Yeti-Way provides even higher maximum wins of up to 30,000x the bet.

Both slots are played on a 6-reel grid, ranked as highly volatile games and feature up to 262,144 ways to win. The RTP for Dr Toonz is slightly higher compared to the Yeti adventure – 96.25% vs 96.18%. According to this percentage, these two titles fit perfectly into the industry’s average when it comes to the return to player percentage.

The Quantumeter fills during spins and in the base game starts at 0-2 charges.

Every winning cascade charges the meter by 1 on one spin. When 3 charges are reached, the meter is full.

Each charge features a unique color which is chosen randomly on each basic or free spin:

Free Spins are activated once three, four, five or six Scatters land simultaneously awarding 10, 15, 20, or 25 respectively. Here the Quantumeter starts with one or two charges on each free spin.

Another thing that happens on each free spin is that one or more reels are selected to have an x2 multiplier. To make things more interesting, up to six multipliers can activate, opening the possibility for the win amount to be multiplied up to x64. 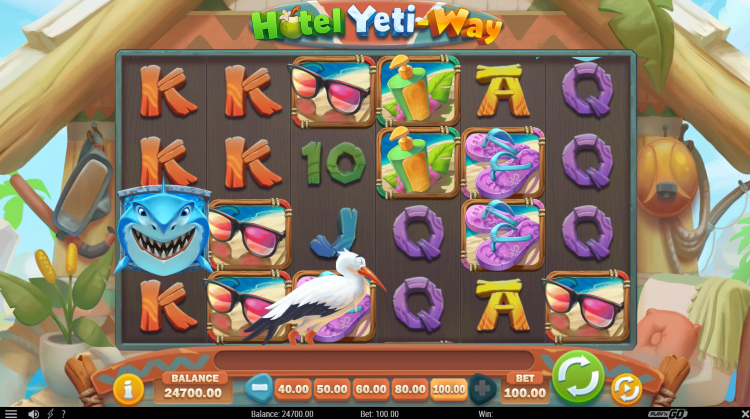 Hotel Yeti-Way is also packed with features. As you can guess by the name, the Yeti is a Wild in this slot.

Once Yeti Wild appears on reels it randomly activates one of the following features:

Better yet, these features carry over to the bonus round. Three, four, five or six Scatters here can activate the bonus round with 8, 12, 16, or 20 free spins. On the contrary to the same special feature seen in Dr Toonz, here free spins can be retriggered up to a maximum of 40.

It is a player’s choice which of the three free spins modes will be played: Bungee Free Spins, Surfing Free Spins, or Scuba Diving Free Spins. The difference between them is that landing of the Wild always triggers the respective modifier associated with the mode’s name.

Since launched months before it, this game has actually introduced a new dynamic reel system seen in the Dr Toonz. Meaning that on every free spin, at least one reel is selected to have an x2 pay way multiplier, creating a potential for a total win multiplier of up to x64 and stretching the winning ways to a max of 262,144.

Play’n Go is famous as one of the top slot providers due to the high quality of its games. Both of these slots are a great example of its values, combining extremely engaging gameplay with beautiful aesthetics. Recognizable cartoonish design and top-notch graphics are present in both titles, while the upbeat music perfectly corresponds to each theme.

Speaking of theme, Hotel Yeti-Way shows the mythological Big Foot in an environment where you’ll be least expecting to meet it – on the beautiful tropical beach. Well, guess he took a break from scaring people to enjoy surfing and relaxing, making this one very entertaining backstory.

The theme of Dr Toonz is closely connected to the provider’s hit releases Reactoonz 1 and a sequel Reactions 2. Players were wondering for quite some time who is the crazy scientist responsible for creating adorable little creatures, so the theme and protagonist of this slot is Dr Toonz himself. Since this title is long-awaited, its theme has a small advantage over the Yeti on vacation. 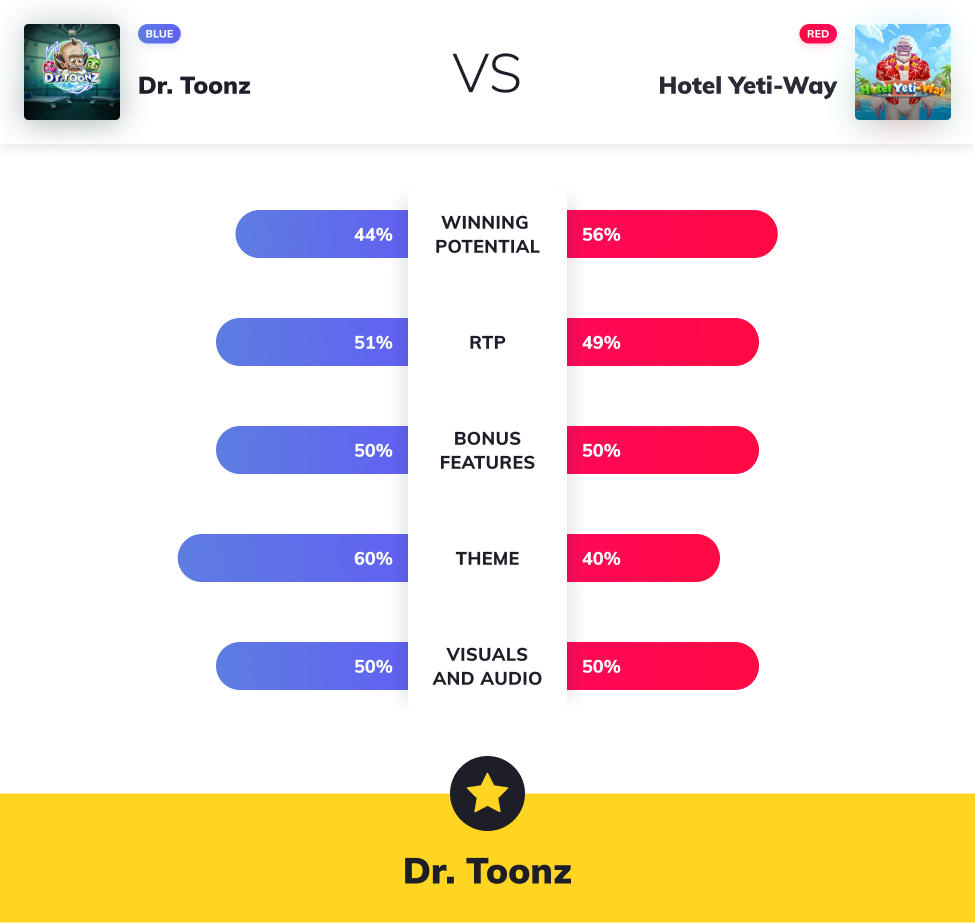 It seems like choosing which is better from two equally remarkable games by the same provider is a mission impossible. Although nitpicking is not nice, here is necessary. The finesses are the ones who decided on a winner, but it was quite tight.

Dr Toonz takes a very close win due to a slightly higher RTP and more interesting theme. On the other hand, the Hotel Yeti-Wild has higher winning potential and equally engaging bonus features, so that might make it a winner in the eyes of players. Either way, you won’t regret trying out any of these two extraordinary slots.