Pragmatic Play recently launched a sequel to one of its beloved games, a new title named Release The Kraken 2. Just in time for another slot war where this game will challenge the provider’s great release Firebird Spirit.

Is the fearless Aztec spirit enough to beat the most terrifying sea monster or will the mighty Kraken sink this game as many ships before it? Get ready to find out in the new episode of slot wars.

Although Firebird Spirit comes with a 6×5 configuration, regular symbols can hit only on the first five, while the sixth is reserved only for special symbols. Nevertheless, the game offers up to 1,875 ways to win and a winning potential of up to 4,250x the bet. 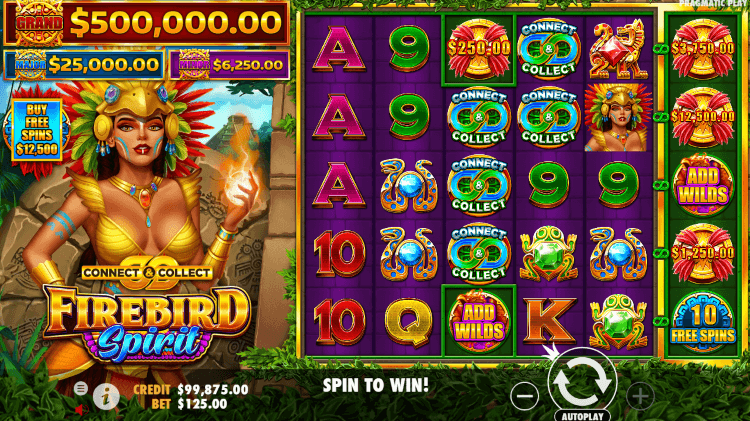 The sequel of Release The Kraken comes with surprisingly lower winning potential compared to the original. However, the maximum prize of 5,000x the stake is more than enough to make it a winner of this round, despite its smaller 5×4 grid size with 20 to 40 paylines.

This game also has a higher RTP of 96.5%, compared to the 96% featured in the rival slot. While this is a small difference, it does make Release The Kraken 2 an even more compelling winner of this round. Both titles offer an extremely high level of volatility, ranked 5/5 by the provider.

Connect & Collect symbols are stars of the Firebird Spirit slot and can appear on the first five reels in any of the non-special positions. When adjacent Connect & Collect symbols land from the first reel onwards and touch a symbol on the sixth reel or the special positions (the top and bottom cells on the third reel), whatever they touch is awarded.

Symbols on the sixth reel or the special positions can be:

Connect & Collect feature is also used during free spins round the same as in the base game but with one exception – reels 1 and 2 synchronize their symbols, and reels 4 and 5 synch their symbols as well when they stop spinning. The feature can be purchased via Buy Bonus option for 100x the bet. 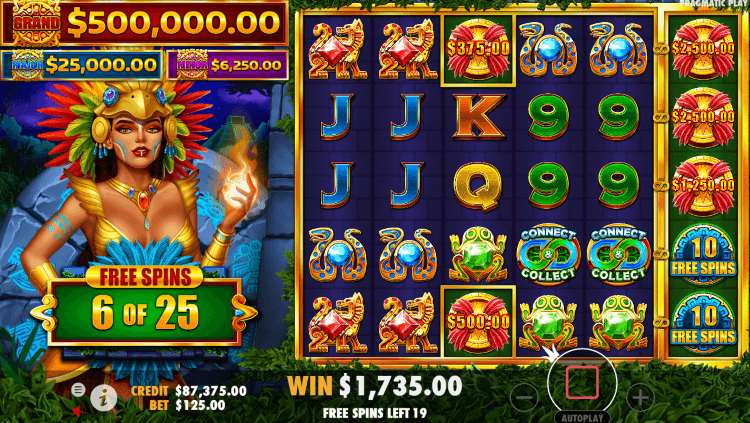 The base game of Release The Kraken 2 is equally exciting and unpredictable thanks to three features that can be activated at any time, starting with Wild Respins. It is triggered if 4 or more Wilds hit after the payout. For respins, the triggering Wilds stay on reels and shift to random positions while the other symbols respun. Every new Wild that drops awards one more respin and the feature ends when no more Wilds hit after a respin.

Shifting Stack Wilds can appear randomly on reels 2, 3 or 4, and when they do, they are moved to cover all positions on their reel.For each position nudged, its multiplier is increased by 1 and wins are paid after the nudging with all multiplier values added together before being applied.

To make things even better, on a random non-winning spin, the Kraken can craw into view, reshuffle symbols and create a winning combo worth from 20x to 50x the bet. This random feature is called Guaranteed Win.

The bonus round trigger with 3+ Scatters is a bit unconventional as it starts with a picking mini-game. Depending on the number of triggering Scatters, the player gets a chest with unknown number of free spins and win multiplier value. 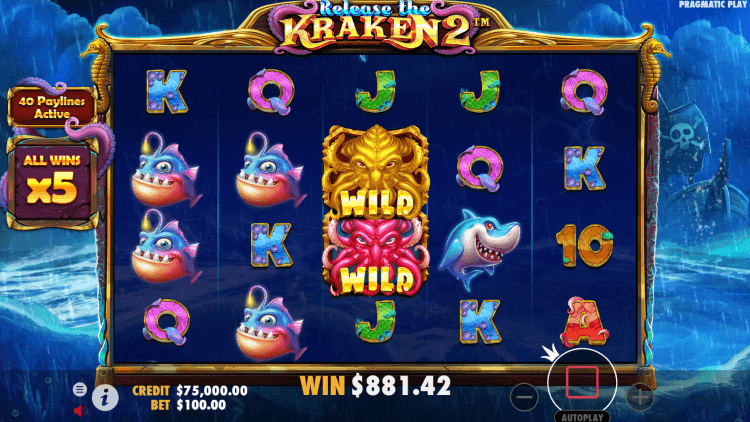 Choosing to open such chest, leads you straight to the bonus round. However, you can also decide to gamble and open any other of 16 chests presented in a hope of getting more free spins and a higher multiplier.

During free spins, the win multiplier applies to all wins, while the number of paylines is increased to 40. Also, Wilds that hit remain on reels and move to a random cell after each free spin. The appearance of any Golden Wild increases the win multiplier by 1.

As its rival, Release The Kraken 2 comes with a Bonus Buy as well, but offers 2 options – to purchase Standard Free Spins for 100x the bet or buy VIP Free Spins guaranteed to start with 5 Scatters for 250x the stake. Besides having stronger and more numerous features this slot also has an Ante Bet option that Firebird Spirit is lacking, which makes it a winner of the round once again.

Release the Kraken 2 features a sea theme, while the Firebird Spirit revolves around Aztec culture. Both themes are heavily used in the slot industry, so none of these games is quite original in this area.

The high standards of graphics and animation quality are present in both titles, but Release The Kraken 2 more resembles Pragmatic’s style. On the other hand, Firebird Spirit does have an uncommon grid configuration which makes it edgier.

All in all, two games have an impeccable visual appearance, but attract different types of players. Therefore, this round is tied. 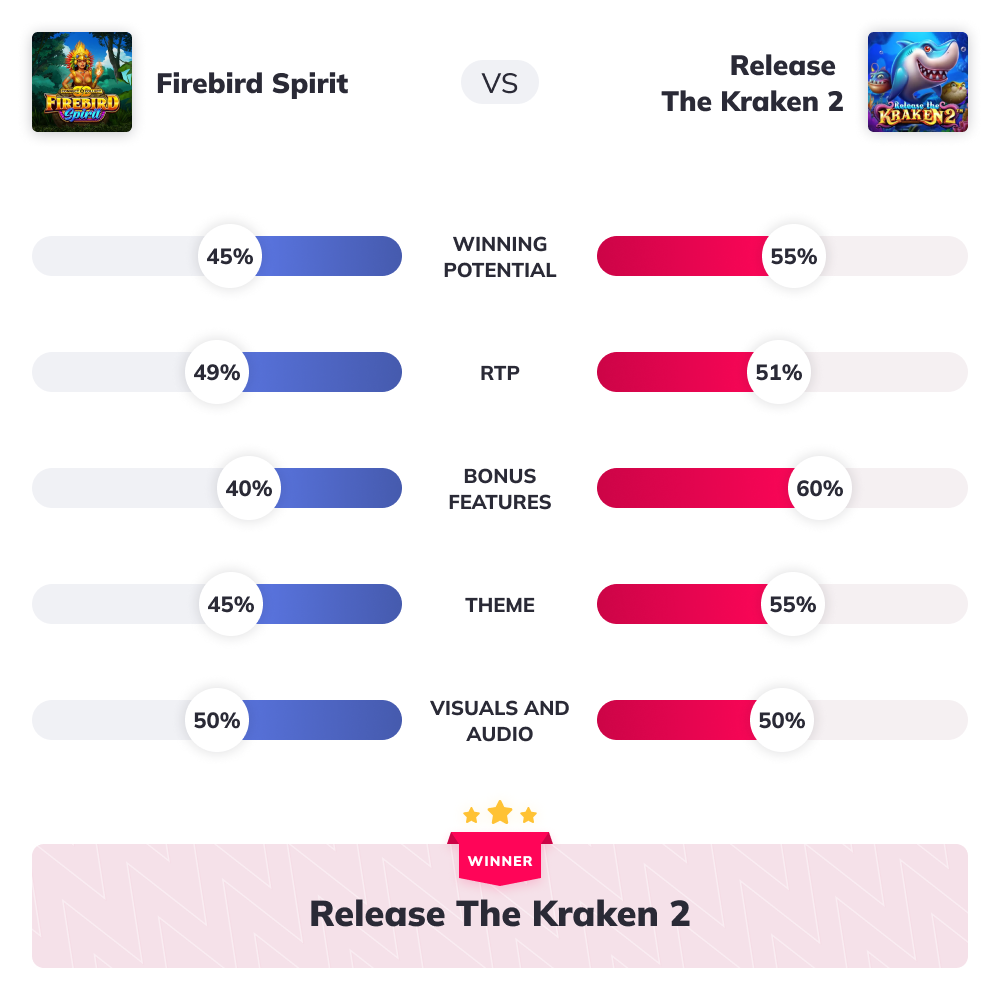 Although it looks simple and cute, Release The Kraken 2 hides powerful and thrilling gameplay. While the same can be said for Firebird Spirit which is an excellent slot, the sea-themed game won fair and square, mostly to more elaborate features and higher winning potential.