Hacksaw Gaming always pushes limits and shakes the online gambling industry to its core with its innovative releases. Even when it uses the most popular themes seen so many times before, the brand manages to present them in a completely new light. That’s exactly the case with Gladiator Legends and Hand of Anubis slots, protagonists of this episode of slot wars.

At first sight, both games seem super interesting, but that’s to be expected from this provider. Gladiator Legends revolve around the Roman Empire and famous gladiators, while the Hand of Anubis opens the chapter in Egypt mythology, but present it in a much darker way.

Let’s see which of these games came victorious, start the slot war!.

The gladiators are fighting in the arena composed of a 5×4 grid with 10 paylines. While this looks quite standard, it actually opens the door towards a huge maximum winning potential of up to 10,000x the stake.

Although the Egyptian adventure has a larger playfield with a 5×6 grid and cluster pays mechanism, it features the same max winning potential as the Gladiator Legends. Another thing these slots have in common is the minimum bet per spin starting from €0.10, as well as volatility at the highest level. 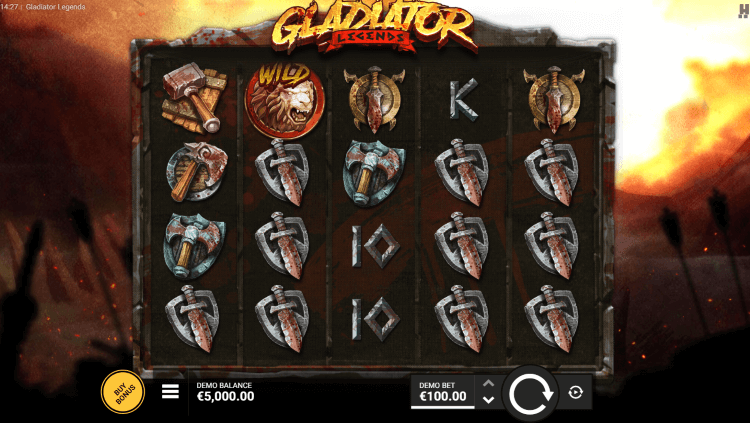 When it comes to RTP, the gladiator-inspired release comes with the standard return value of 96.31%. However, the four types of bonus buy are affecting the RTP, increasing it up to 96.46% for the most costly feature.

There are also four bonus buy options affecting RTP, all of which are noted in the next section. Hit frequency, meanwhile, has been recorded at 26.71% and occurs when matching symbols land across one of the 10 paylines, starting from the leftmost side of the panel. 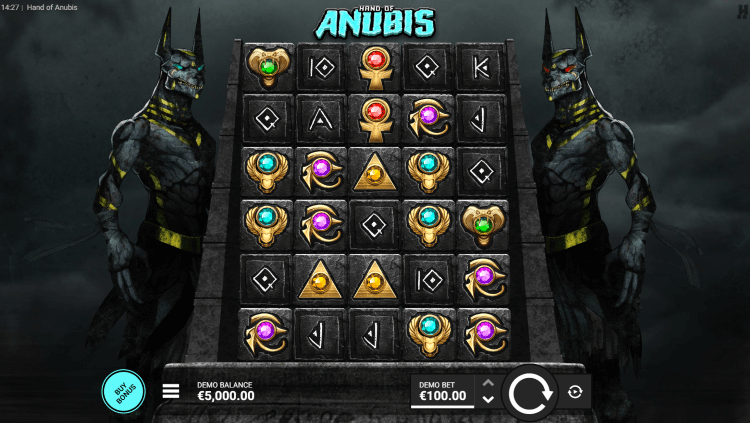 It is similar in Hand of Anubis slot, where the standard RTPin the base game is 96.24%. If you buy the Underworld feature, the return to the player increases a bit to 96.29% but decreases to 96.18% if you purchase the Judgment bonus.

So, while the games are tied in the winning potential, Gladiator Legends has a slightly higher RTP which makes it a close winner of this round.

In the base game of Hand of Anubis slot, the emphasis is put on two types of Soul Orbs representing Wilds with progressive multipliers. The multiplier of Red Soul Orb increases by 1 or every symbol in each winning cluster, while the Blue Soul Orb multiplier rises by 1 for every winning cluster.

Exactly three bonus symbols on reels activate the Underworld bonus round with 10 free spins five numbers under the grid, each representing a multiplier starting from zero. That’s just the beginning of numerous perks found in this bonus round with multipliers and special symbols flying left and right.

Another bonus round found here is the Judgement feature, activated by 4 bonus symbols landing simultaneously. Here, the regular symbols are removed, allowing only blank or special blocks to land. It is a hold & win round that starts with 3 free spins with multipliers above each reel, 4 types of Multiplier Modifier Blocks and many more benefits that might help raise the winnings through the roof. 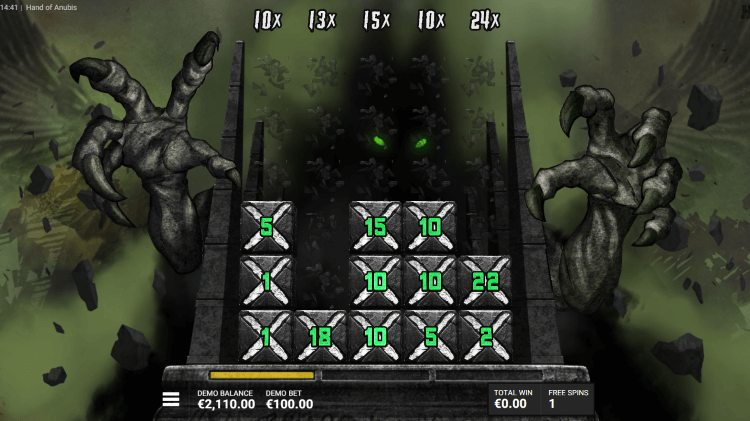 On the contrary, the bonus rounds of Gladiator Legends have a more familiar feel. Starting from VS symbols that have helped the famous streamer Roshtain to hit an epic win of over 17 million dollars in Wanted Dead or A Wild slot.

These symbols have 2 multipliers representing two gladiators that expand into full-reel Duel Reel symbols if they can form a win. Gladiators battle and the winner’s multiplier is applied to the entire reel.

Three Arena symbols in view activate the Champions of the Arena feature, starting with 3 free spins reset every time a VS symbol lands. Multiplier coin symbols can appear in this round as Normal Coins and Epic Coins with different perks.

Unleash the Beast also starts with three free spins and is activated with 3 Beast symbols landing together on reels. Reels 1, 2, 4, and 5 here also have reel multipliers while the reel 3 is locked Beast Reel, unlocked only when VS symbol lands on all other 4 reels. But when it’s unlocked, it unleashes the incredible power of a special Beast Duel multiplier. 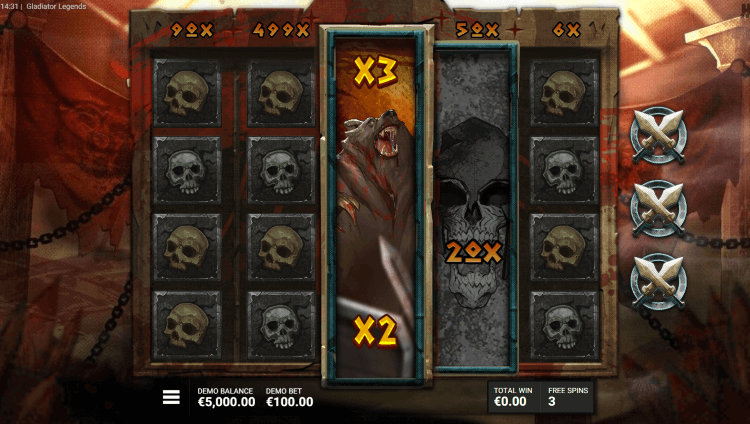 As mentioned, both games have the bonus buy option. In fact, that was the tipping point when deciding the winner in this segment.

Since the bonus rounds are equally thrilling, the fact that Gladiator Legends offer a chance to buy 4 different bonuses instead of the 2 that Hand of Anubis slot offers, determined the winner. Still, it is really hairsplitting as both games offer an amazing playing experience.

The themes of these games are used over and over again and are certainly one of the most popular themes in the slot industry. It takes a lot of creativity to make them look and feel innovative and that’s exactly what Hacksaw did.

After countless slots revolving around pyramids and Egyptian deities, Hand of Anubis comes as a surprisingly refreshing. It is a much darker, serious release that presents the underworld in all its terror. Two horrifying-looking Anubis figures guard the reels on each side, while the gold symbols pop up on the black, stone grid.

The scene shifts when you enter the Underworld feature showing an even scarier scene, but that’s nothing compared to the eerie setting of the Judgment bonus round. Amazingly designed visuals are followed by superb graphics and animation that will keep you at the edge of your seat.

While Gladiator Legends also features state-of-the-art design, animation and graphics, the slight advantage goes to the Hand of Anubis. Mostly because with this game the provider showed the new direction in making the over-used theme fresh again. 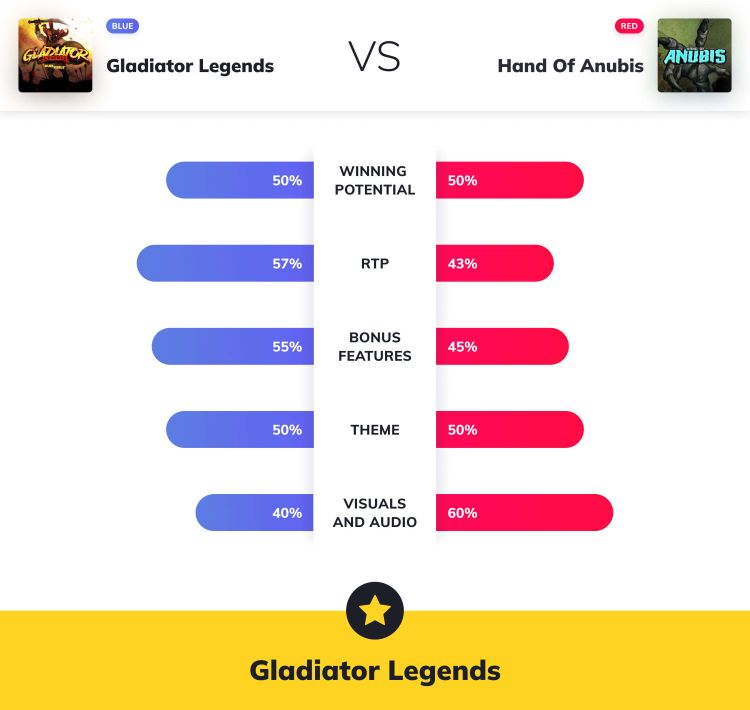 This episode of Slot Wars has maybe been the toughest of them all so far. The same maximum winning potential, equally interesting bonus features, the most popular slot themes completely revamped, and the RTP that differs by the decimals.

A lot of nitpicking took place to make the Gladiator Legends a winner of this edition of the Slot Wars. It was the closest call yet, as both of these games are extraordinary. Hand of Anubis slot revolutionizes the genre, while the fireless gladiators are offering an adventure of a lifetime. There’s no need to pick, try them both and prepare to be amazed.