For the first time ever, Quikspin releases are entering the battle and competing for the winning Slot Wars title. The studio has been providing online gambling operators with outstanding products for years now, rising to be one of the leading software developers on the iGaming scene.

Entering the Slot Wars ring fresh out of the oven is the Golden Glyph 2 release and its older brother Golden Glyph. The big popularity of the original title ensured the sequel lands on the market and brings players an upgraded version. It’s time to see if what the 2nd Golden Glyph has in-store for players has surpassed the original gameplay.

Spinning Golden Glyph reels, players have the chance to win as much as 13,000x the stake which is quite impressive winning potential. However, Quickspin has pumped up reels with extra power in the sequel, making it rise to a stunning 26,600x the stake. 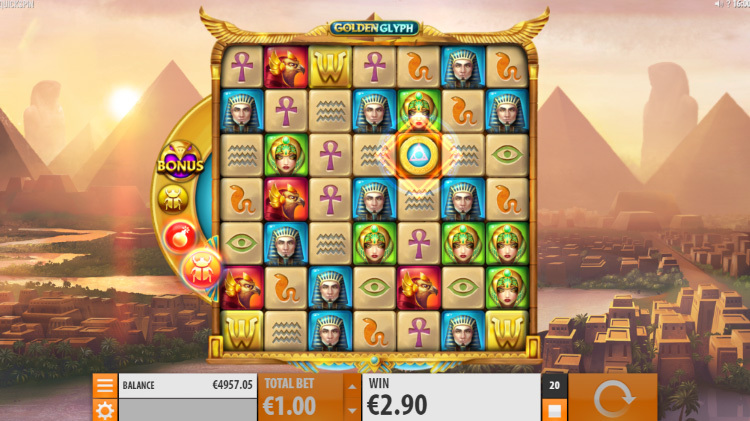 In terms of RTP, the provider has pulled back a step in the new release. The first game is featuring an RTP of 96,16% and in Golden Glyph 2 the RTP has fallen to 96,09%. Still, both games are meeting the industry standard in this regard and players shouldn’t feel disadvantaged in any way.

Both games are packed with fun bonus features, creating dynamic gameplays and presenting players with highly entertaining betting sessions. Power Symbols have in both cases the central role. They appear after a winning cluster disappears from the grid and they behave as Wilds. 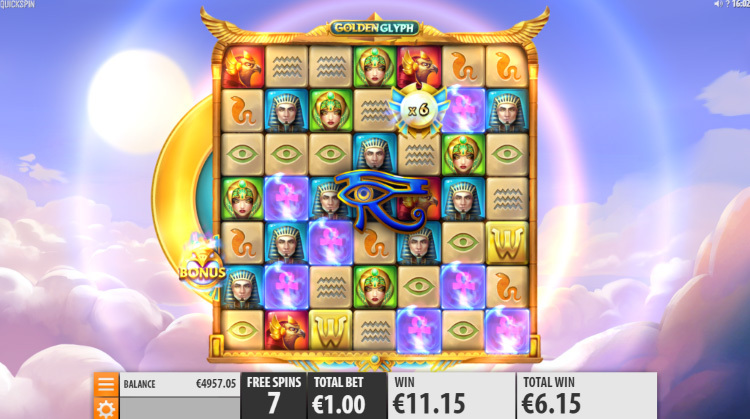 There are Power-Up modifiers but while the original version has only 4, the new game has 7 of them. They are all lined up on a track and get activated as long as winning combos keep piling up. Once you land a dead spin, the track is set back to the starting position.

The activation of the last Power-Up modifier in the original Golden Glyph slot triggers 9 Free spins. Right from the get-go, Wild is placed in a random position on the reels, and the progressive multiplier attached to this symbol increases by 1 each time when it’s part of a winning combo.

Quickspin has cranked up the bonus modifiers in the Golden Glyph 2 so players, if they’re lucky, get to trigger 7 Power-Ups in total. The first 6 are either bringing between 4 and 11 Wilds to the grid or they are activating one of 6 Patterns of Horus, removing certain symbols from the reels. The 7th Power-Up is bringing 2×3 sized Gigantic Wild creating the possibility for some epic wins. 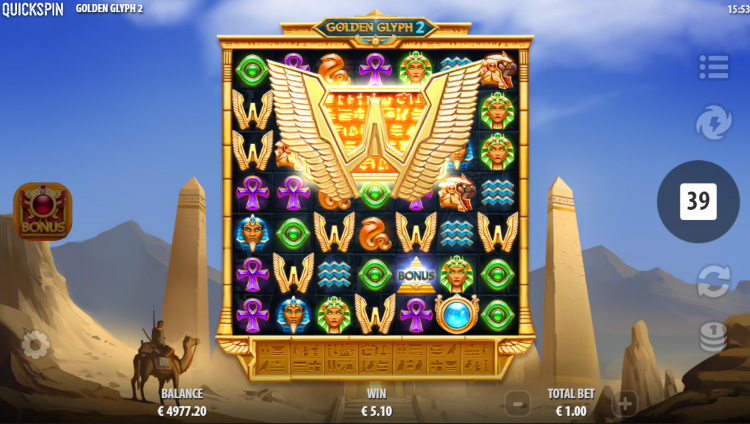 To trigger Free Spins, you have to land 3 Scatters. Although the number of Free Spins in the sequel has fallen to 7, it still has a Wild with a progressive multiplier attached that can rise up to a maximum of 50x. This is a significant downgrade from the 99x multiplier in the original but still can provide players with some pretty hefty prizes.

Both games are visually appealing but there is an evident upgrade in terms of visuals and audio effects that happened in the Golden Glyph 2. The overall design is slicker, colors more vibrant, and animations a bit smoother.

Based on the rich and secretive world of Ancient Egypt, the most popular theme in the world of online slots, these releases are featuring epic soundtracks. The dramatic and mysterious music makes the whole gaming experience much more immersive and entertaining. 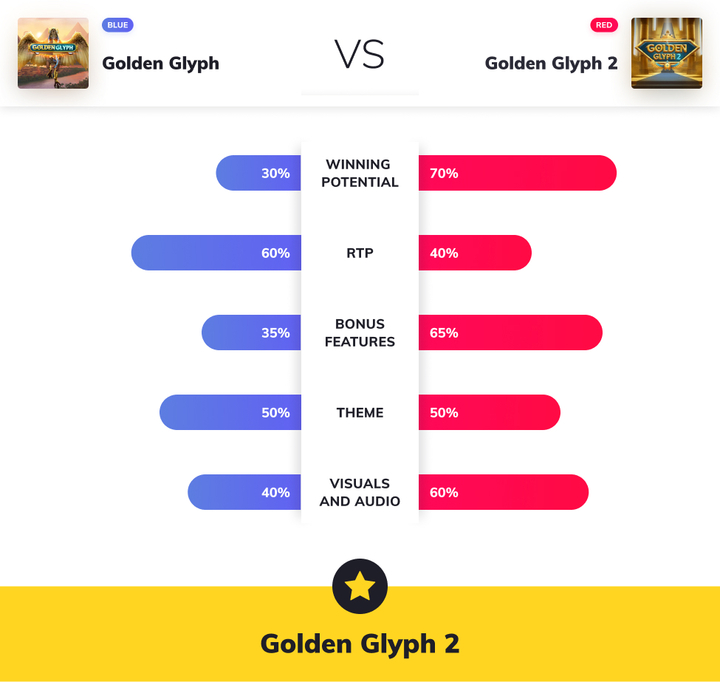 Quickspin was able to build upon the success of the previous release and come up with something even better. No matter which one you choose, you’ll have a fun-filled gambling session but Golden Glyph 2 offers crisper visuals and more dynamic gameplay thanks to added bonus features. Not to mention, it also features much higher winning potential so players have a chance to land some massive wins and take home hefty prizes.