Get ready to find out who is tougher – a ferocious gorilla or the Big Bad Wolf! In this battle, Pragmatic Play’s slots Gorilla Mayhem and Greedy Wolf are facing each other and there can be only one winner.

Will the silverback knock the fangs out of the wolf? Or the wolf will huff and puff the big ape out of his way?

Let’s find out in the new episode of slot wars, start the battle!

Winning potential isn’t everything, but truth to be told it is one of the features that attracts players the most. Piggies are building their houses on a 5×4 grid with 20 paylines while being chased by the wolf determine to knock them down, but here his puffing and huffing increase the winning potential up to 3,000x the bet.

A jungle expedition is played on the same grid with the same number of paylines. However, reels here can produce higher wins, rising a potential up to a big maximum prize of up to 5,000x the stake and making this slot an obvious winner of this segment. 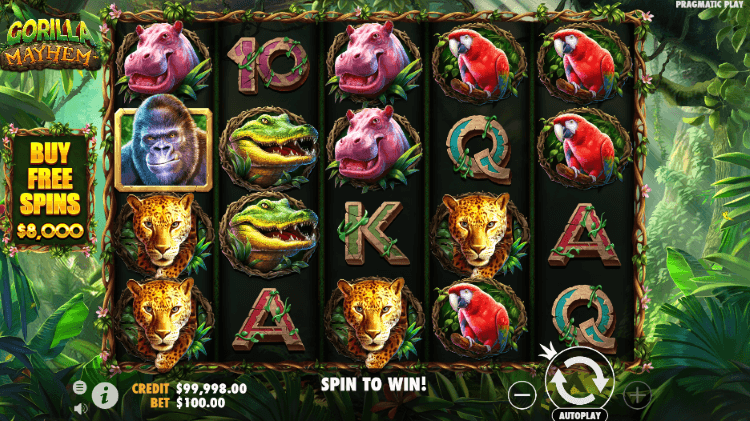 As expected from the game set deep in the jungle with vicious predators like snakes, leopards and crocodiles spinning on reels, Gorilla Mayhem has the highest level of volatility, ranked 5/5 by the provider. On the other hand, Greedy Wolf is more mellow and features medium variance gameplay.

Since the gorilla slot comes with an RTP of 96.50% and the wolf one with 96.48%, they are almost the same. Such a small percentage difference is irrelevant as it doesn’t have a visible effect on the gameplay whatsoever.

The game with Big Bad Wolf as the protagonist comes with a bonus round, as well as three random base game modifiers – expanding sticky Greedy Wolf Wild, 3 Little Pigs Wilds and Respins and Guaranteed Win (when active guarantees a win of at least 20x the bet or enough Scatters to trigger free spins).

On the contrary, Gorilla Mayhem doesn’t have any random modifiers. What it does have is two types of Wilds. The standard one substitute all regular symbols, while a special Golden Gorilla Wild comes with up 3x multiplier and can only replace the top paying gorilla symbol.

Still, the main feature in both slots is the free spins round. In Greedy Wolf, you need 6 Scatters to hit at the same time to activate 6 free spins.

All positions of these Scatters become framed, as well as other positions where new Scatters land during free spins. If a new Scatter land on a cell that is already framed, it is upgraded from straw to wood, then bricks, then castle.

At the end of the feature, the framed positions are converted into houses and the wolf blows them away from reels to reveal money prizes. A house made of straw is less valuable than the wooden one, a brick home has bigger money prizes than a wooden house, while the castle brings the highest wins. 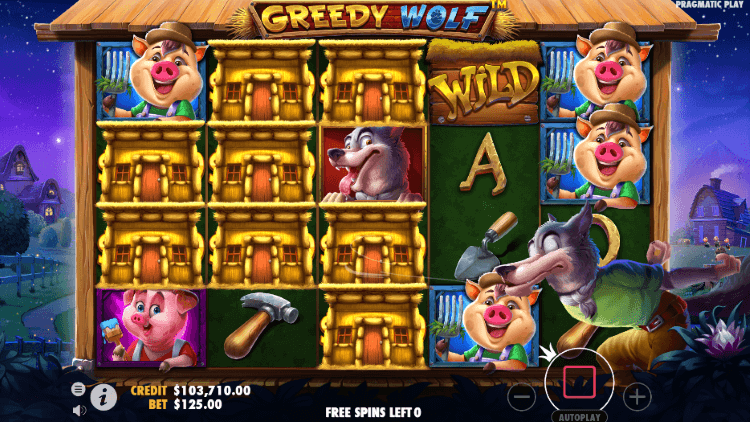 To activate the bonus feature in Gorilla Mayhem, you’ll need 3, 4 or 5 turquoise crystal Scatters that award 10, 15 or 20 free spins respectively. Free spins have a progressive feature with 3 levels that you move through by collecting regular and golden Wild gorilla symbols as they land.

Each next level reach brings a higher Wild multiplier value and adds 3 more spins. This progressive feature is the reason why this slot has a slight advantage over the Greedy Wolf game, as it can produce higher wins due to an increased multiplier.

These slots have quite different themes – one revolves around the jungle and its majestic wild animals in their natural habitat, while the other one retells the story of The Three Little Pigs.

The jungle adventure gets more points on the theme front solely because it does feature some tweaks to make it stand out from similar slots, while Greedy Wolf resembles a lot to the same-themed games.

Visuals and graphics are simply amazing, at the highest level of quality. Nothing less was expected from Pragmatic Play, whose releases are always beautifully designed and animated.

These two games are equally attractive to the eye, but since the story of little piggies and hungry wolf is basically a children’s tale, its presentation is more cute and cartoonish. On th either hand, Gorilla Mayhem is a more serious release that creates the feeling like you’re actually in the jungle while playing it.

While Gorilla Mayhem slot is a winner of this slot, it doesn’t take away anything from Greedy Wolf. These are simply two different games made for different types of players, both amazing in their own way.