Slot Wars – Misery Mining VS Fire in The Hole

In this episode of Slots Wars, two mining-inspired releases by Nolimit City are up for a battle. So similar at the first sight, but will the deeper look reveal one to be much superior to the other? Which one is more powerful – Misery Mining or Fire In The Hole?

Nowadays, expectations are much higher when it comes to slot games.  Engaging bonus rounds, high-quality graphics, an interesting theme, decent winning potential and overall fun gameplay have become usual demands of players. Luckily, both releases competing in this edition of slot wars have all of these traits, plus the ability to produce some massive wins.

Played on a 6×6 grid with up to 46,656 ways to win, Fire In The Hole hit the market first and blow away everybody with its incredible maximum potential of up to 60,000x the bet. Just when it seemed like it can get better, the Misery Mining slot was released with expanded up to 7×7 grid and up to 823,543 ways to win, bringing the chance for even bigger, astonishing wins of up to 70,000x the stake!

Both of these releases are marked by the provider as slots with extreme volatility, ranked 10 out of 10. The RTP percentage is almost the same, with such a subtle difference that can go unnoticed – 96.09% in Misery Mining and 96.06% in Fire In The Hole.

Nolimit City distinguishes itself as one of the most innovative slot providers in the industry, especially when it comes to bonus features. Every new release is more modern than the other, with special features flying left and right. These releases aren’t different and have many similarities in this area.

Both titles have Collapsing Mine feature, which is essentially a bit more elaborate cascading system. Each spin begins with a 3×3 grid and each collapse opens an additional row. Explosions of xBombs increase the play area.

xBomb Wild Multiplier is another thing these slots have in common. Whenever they are a part of a win, xBomb Wilds explode removing all adjacent regular pay symbols and increasing a win multiplier by x1 for the next collapse.

Fire In The Hole also has a Wild Mining bonus, triggered with 3,4 or 5 matching symbols landing in a horizontal line, but without a formation of a winning combo. Triggering symbols are removed and 1, 2 or 3 Wilds are added to the middle of the alignment. All other positions in the active area explode, except Scatters or Wilds, afterward a new collapse is triggered.

On the other hand, Mystery Mining has a similar feature named xBomb Mining where Scatters transform into non-wild xBombs when there are less than 3 Scatter in view. Transformed symbols then explode, triggering the collapse, increasing the win multiplier, and moving barriers.

Still, when it comes to bonus rounds, the spotlight is on the free spins. Although the size of the grid during free spins depends on the number of triggering Scatters in both games, Misery Mining has more modifiers as well as the chance for players to choose the volatility of the bonus round – high or extreme.

The two slots also provide inpatient punters option to activate special features at any time via Buy Bonus, but it comes with a cost.
Due to a bit more elaborate free spins round, Misery Mining takes the win when it comes to bonus features.

These slots come with the same mining theme and hence, similar visuals. It could be said that Fire In a Hole has a more cartoonish style, but it still features high-quality graphics and great design. Soundtracks are also quite similar, enchanting the thrill with suspenseful music.

Due to the same theme and visuals, it could be said that the Misery Mine is some form of the sequel to the explosive first mining-themed release. Since there is almost no difference in presentation, the score is tied regarding visual and audio effects. 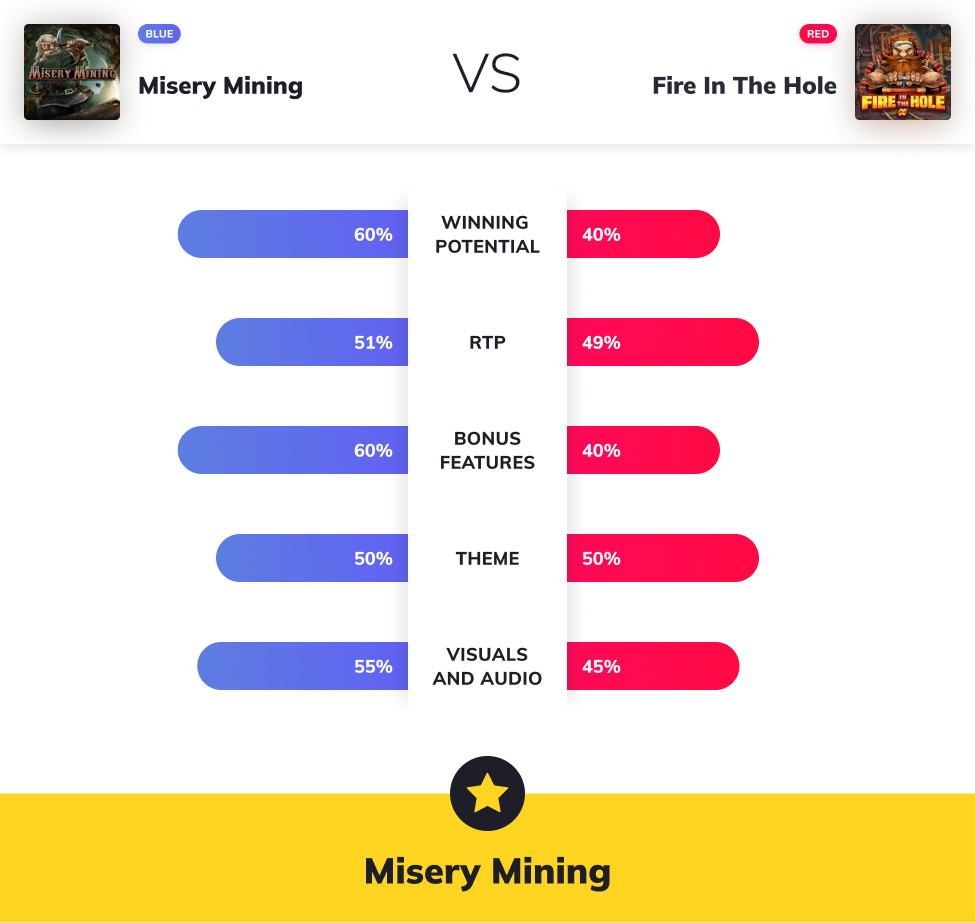 It was a close one, but the Misery Mining slot takes the win in this battle. In the end, it is a bit improved version of the Fire in a Hole slot, with increased winning potential and a slightly more exciting free spin feature.

Still, these are both high-quality releases and more than worthy additions to Nolimit City’s portfolio of premium slots. So, no matter which one you choose to play, a great playing experience is guaranteed.