Pragmatic Play has delighted its players with two amazing slots and now it is time to see which one is better in another slot war. Sword of Ares which many consider the sequel of the mega-popular Gates of Olympus slot is a throwback to Greek mythology, while Big Bass – Keeping it Reel represents the newest addition to one of the provider’s most successful series.

What chances does the simple fisherman have against the God of War itself? Find out in the new episode of slot wars.

Sword of Ares is played on a 6×5 grid with 20 paylines and tumbling mechanics. Such a big playground opens doors towards the winning potential of up to 10,000x the win.

However, despite having the smaller 5×3 grid configuration with 10 paylines, Big Bass – Keeping it Reel comes with precisely the same maximum prize. Another thing that’s same is the volatility level, as both games have very high variance, rated 5/5 by the provider. 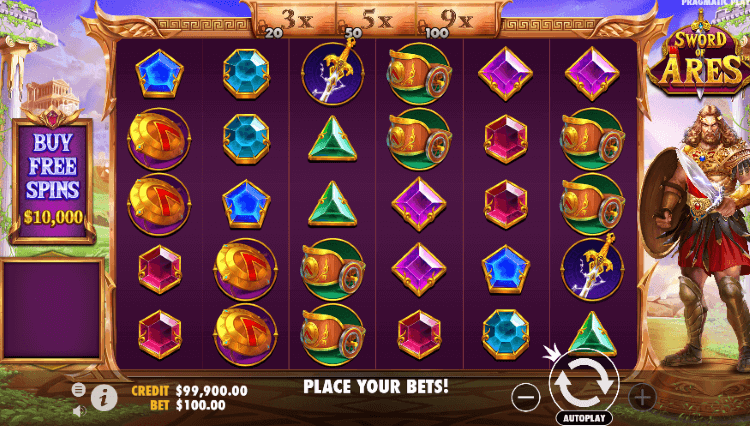 When it comes to RTP, the release inspired by Greek mythology has a slight advantage, featuring the return to player percentage of 96.40. Still, the fishing expedition comes with a solid RTP of 96.07%. Such a small difference doesn’t have much effect on the gameplay, so this round is tied.

Pragmatic has really thought a curve ball since these two games are enriched with strong and numerous special features. In the game revolving around the mighty Ares, they start with tumbling reels that remove all winning symbols from the reels, allowing new ones to drop from above and maybe create a new winning cluster.

The spotlight in this slot is placed on progressive multipliers. There’s a meter on top of reels displaying 3 multiplier values in the base game and 6 values in free spins that collects winning or exploding symbols.

When enough points are collected, the first multiplier is unlocked, then the second and so on. In the base game, the value of the final multiplier can reach up to 15x, while during free spins can rise up to an incredible 500x.

Speaking off, the bonus round with 15 free spins is activated by landing 4 or more Scatters. The mechanic is pretty much the same as in the base game, except the multiplier meter is expanded drastically.

Another symbol to keep your eye on is a Bomb card that comes in 4 types. Whenever a Bomb hits during free spins, it first stays locked before exploding and removing all symbols from the board.

Removed symbols are collected by the multipliers while new symbols drop down from above to take their place. In the base game, Bombs only explode if there is at least one tumble.

Big Bass Bonanza  – Keeping it Reel reserves its special bits for the bonus round with up to 20 free spins triggered by at least 3 Scatters. If there are only 2 Scatters in view, the third one might be hooked onto the screen to activate free spins. 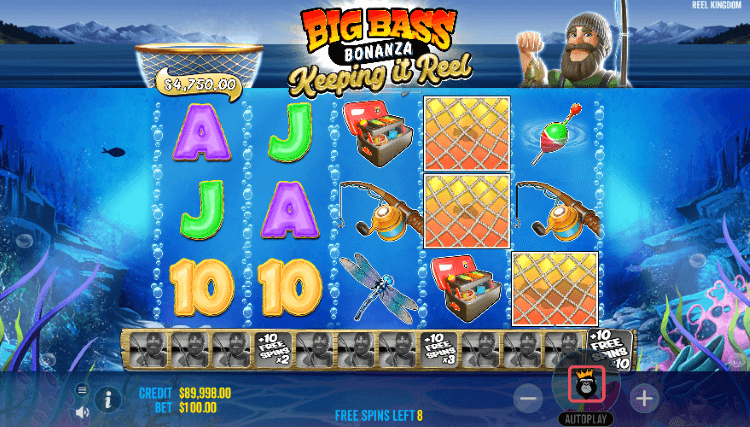 During free spins, both regular and Golden Wilds are added to reels. Whenever a fish money symbol lands while either of these symbols is on screen, its cash value is collected and awarded. If there are no Wilds in view, their values are added to a prize net sitting above the grid.

On each following spin, a random fish escapes the pot, decreasing its value. However, when a Golden Wild appears it doesn’t only collect the values of fish symbols but the value of the prize pot as well.

A few random elements are also present, like money symbols appearing in random positions if there is a fisherman card on reels, but no fishes. It works another way around as well.

Oh, but there’s more! Any Wild landing is collected as well on the multiplier trail. Every 4 collected retriggers 10 free spins with a multiplier or each fish money symbol collection. The multiplier progresses up to 10x and when the final level is reached the feature can’t be retriggered again.

As you can see, both games come with great bonus features flying left and right. While the accent in fishing-themed release lies on Money symbols, the Sword of Aries focuses on multipliers.

Either way, features are equally strong, so choosing a winner is quite an ungrateful task. Especially because they potentially lead to the same maximum win of 10,000x the stake. Therefore, this round is tied as well.

The Sword of Aries slot is very similar to one of Pragmatic’s most popular slots, Gates of Olympus, suggesting it is one of its sequels. If you recall the perfectly crafted symbols and a mighty God guarding reels, that’s exactly what you are getting here also.

Although the Greek theme is one of the most used ones in slot production, it is quite an impressive game that stands out with its presentation and superb graphics. On the other hand, the fisherman theme is equally common, but this game comes with less design finesse.

However, simplicity is one of the favorite elements of the Big Bass Bonanza series and a big part of its charm. Although the background changes from game to game as the fisherman explores new fishing holes, the recognizable symbols everybody loves are back again. 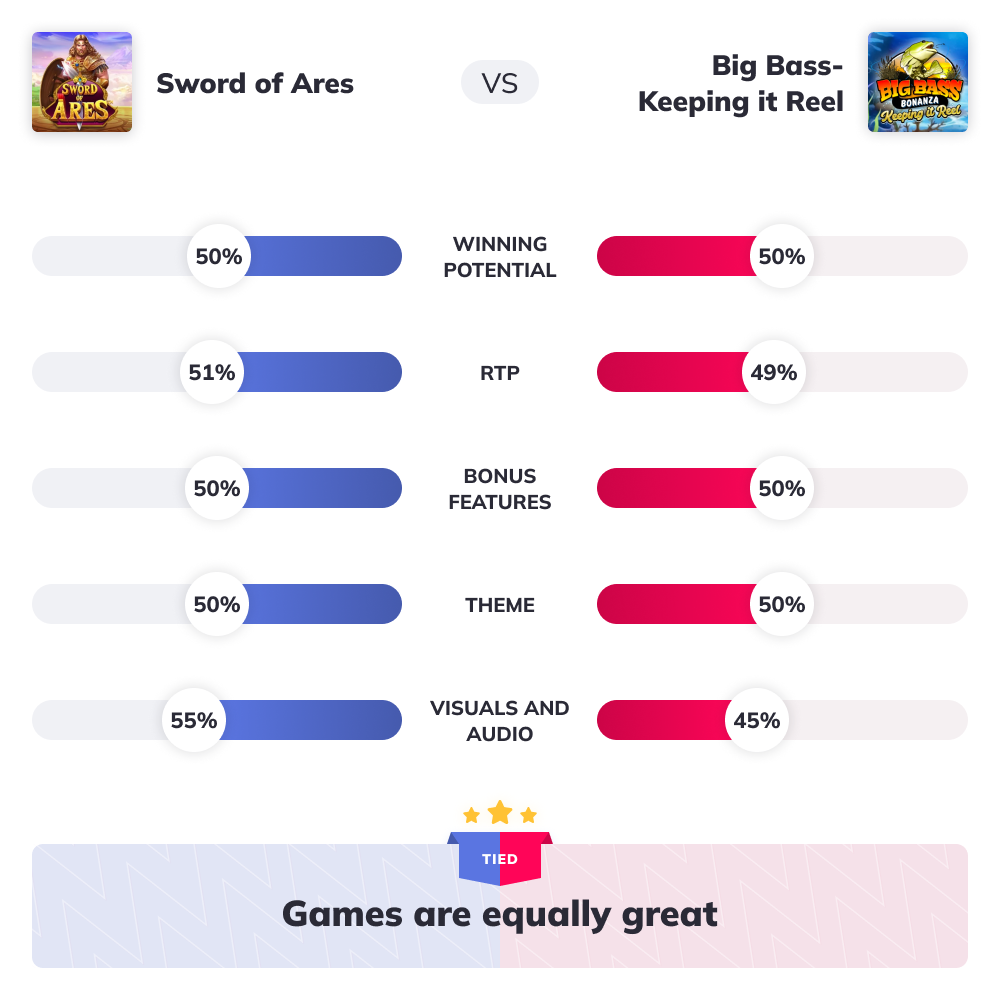 It is clear that this episode of slot wars has to finish with no winners and no losers. Although they are different visually and game-wise, both are equally amazing. Deciding which one to play might be a hassle, but in the end, you don’t have to choose – play them both!