n March 2022, Hacksaw Gaming delighted its fans with a release of two slots – Warrior Ways and Double Rainbow. These are the protagonists in this episode of Slots Wars and it should be quite an interesting battle. At the first glance, the two games can’t be more different, with fierce warriors on one side and cuddly unicorns on the other, so this should be a super-interesting battle.

Winning potential is one of the most important traits of any slot when you play in real money mode and many of Hacksaw Gaming’s releases excel in this area. Take Wanted Dead or A Wild slot for example. The famous casino streamer Roshtein won over $17,5 million and that’s just one of many six-figure wins he hit in this game.

Warrior Ways has similar impressive potential, as its maximum winnings can go up to 10,000x the bet. On the other hand, the maximum prize in the Double Rainbow slot is twice the less as it can produce up to 5,000x the stake. Although this is still big potential for the game of such genre, the winner in this segment is clear. 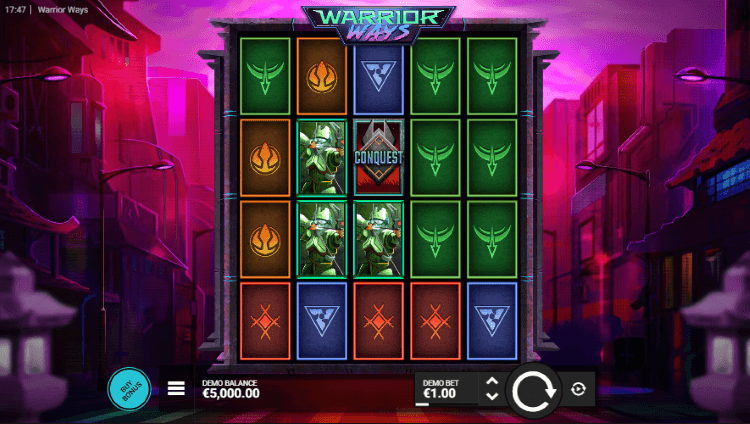 Regarding volatility, it is on the highest level in the warrior-themed release comes, while hopping on the rainbow provides medium volatile gameplay. The RTP is almost the same for both slots – 96.33% in Warrior Ways and 96.38 in Double Rainbow.

Warrior Ways is played on a 5×4 grid with 1,024 ways to win where four competing clans are fighting for power. They clash quite often via the Duel feature triggered any time a VS symbol lands right between two premium warrior symbols from different Clans.

A random multiplier value from 1x to 100x is given to each warrior at the beginning of a Duel. At the end of the feature, the winning Clan’s premium symbol replaces all instances of the losing Clan’s symbol. If the winning symbols result in a win, its multiplier is applied to it.

The Clash feature activates when 3 Clash symbols fall anywhere on the grid. It is quite a complex bonus round with the Collect phase, the possibility of landing Epic Clan Multiplier and activating the Clash phase. Three Conquest symbols on reels at the same time award 10 free spins where Clans battle until destruction. 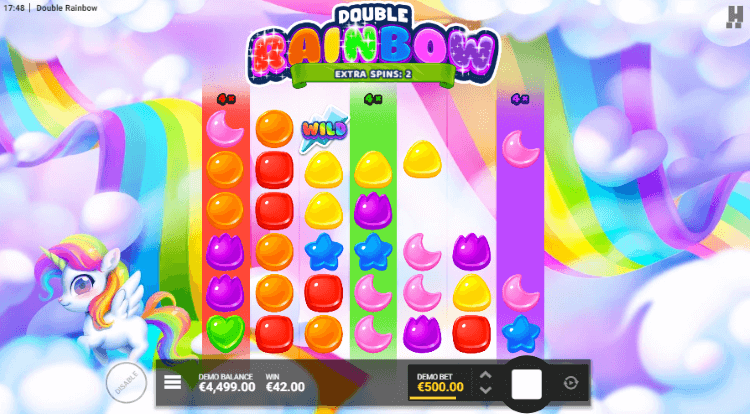 Double Rainbow slot has a bigger playfield with 7 reels, 6 rows and cluster pays mechanics. Here you can encounter two types of cloud symbols – Normal and Double Rainbow Clouds. Both award up to 250x multiplier value, plus 1 or 3 free spins respectively.

When all 7 reels are activated, the Full Rainbow feature is triggered. All seven reel multipliers are multiplied by x2, x3, x4, x5, or x10, plus you get 5 free spins where all activated reels remain active. So, while there’s basically no free spins round per se, you still get extra spins.

Both slots have a Buy Bonus option in two modes where you can activate special features at any time via Buy Bonus, but it comes with a cost. Fun gameplay and great bonus rounds are traits of both these games, but Warrior Ways has more extras compared to its rival.

Regarding visuals, there’s nothing alike between these two slots. Everything is completely different, starting with a theme, with the only common trait being the superb graphics and animation.

Mixing the traditional with modern elements, Warrior Ways presents the Asian theme in a fresh, new light. Ninja-style warrior clans in a street scene lit by the pink and purple light of dawn or dusk are fighting on reels settled in a background metropolis bathed in the light pollution.

It is a cool and unusual scene, while the exotic soundtrack reinforces the feel of the futuristic urban Asian culture the provider has chosen for this game. This is a sophisticatedly designed slot with a certain edge to it.

On the other hand, Double Rainbow is nothing of the sort. In fact, it’s the complete opposite. The grid is nestled on a bed of fluffy clouds surrounded by a rainbow-haired unicorn, rainbows, and candy-like symbols on the reels. There’s nothing subtle about this colorful game, whose vibrant visuals immediately grab the attention.

It is a cute, cheerful slot with a unicorn theme, but some might find it a bit childish. As both slots appeal to different preferences of players, it is ungrateful to compare them in this sense. Still, while the sweet, unicorn theme is seen many times before, the ninja release does add much-needed freshness to the genre with its innovative theme. 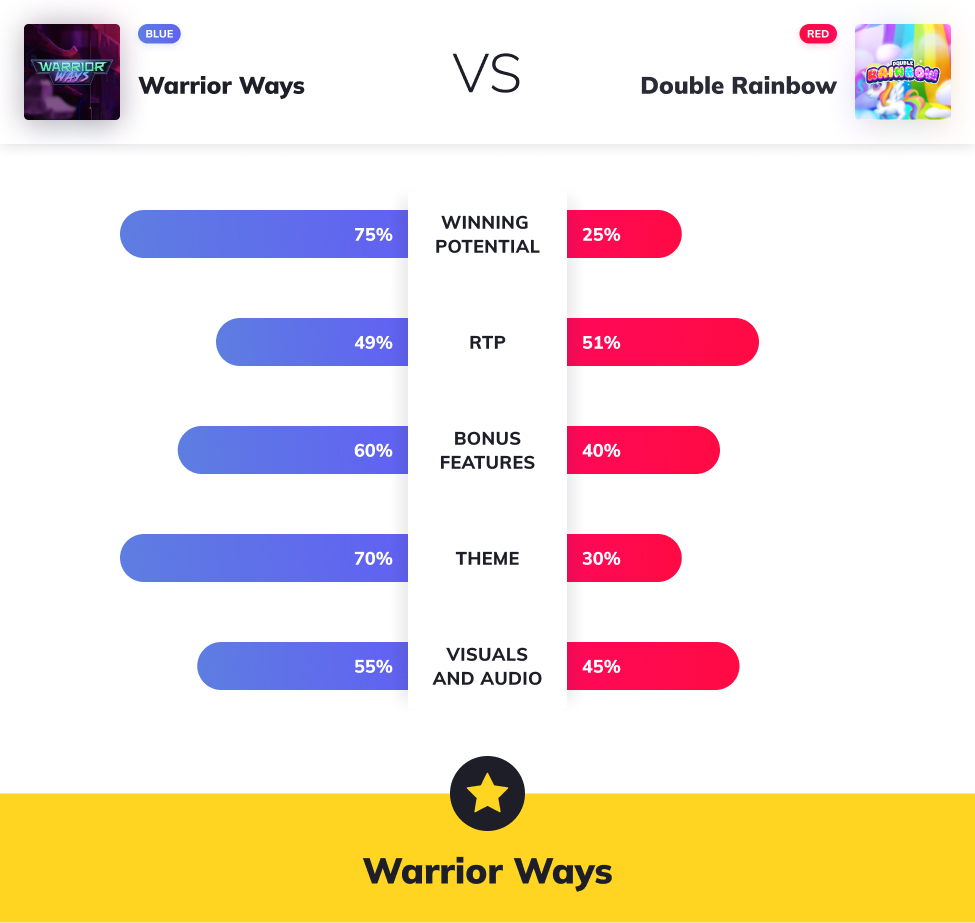 In this edition of slot wars, Warrior Ways ends up victorious. Mostly because it has more bonus features, a refreshing take on an Asian theme and significantly higher winning potential. Double Rainbow is a much lighter yet brighter game that will certainly bring a smile to your face with its colorful visuals. Although completely different, both these games represent premium products with highly entertaining gameplay.