Looking back at the gambling industry during the month of August, you’ll notice a lot of important and exciting things have happened. There were more than a few exciting new video slots, great wins by top casino streamers on Twitch, and many important changes on the legislative front of the industry.

Let’s press an online gambling rewind button and take a closer look at the events that took place during the month of August.

August was an exciting month for slot fans everywhere as the long-awaited sequel of Pragmatic’s legendary Fruit Party was finally released. Fruit Party 2 landed on the market with a familiar 7×7, highly volatile grid layout, and winning potential of 5,000x the stake. Differently from its predecessor, the game features Wild Multiplier that starts at 2x but can reach an amazing 256x. Also, the number of Free Spins depends on the number of Scatters landed. You need at least 3 to trigger the bonus round but the most you can win is 25 free spins.

Aside from this, Pragmatic has also released Rise of Giza with an innovative PowerNudge mechanic and a revamped Megaways version of an old studio hit – Chilli Heat. Play’n Go expanded its portfolio with 4 new games – ZZ Top Roadside Riches, Diamonds of The Realm, Agent of Hearts, and Hugo Carts. 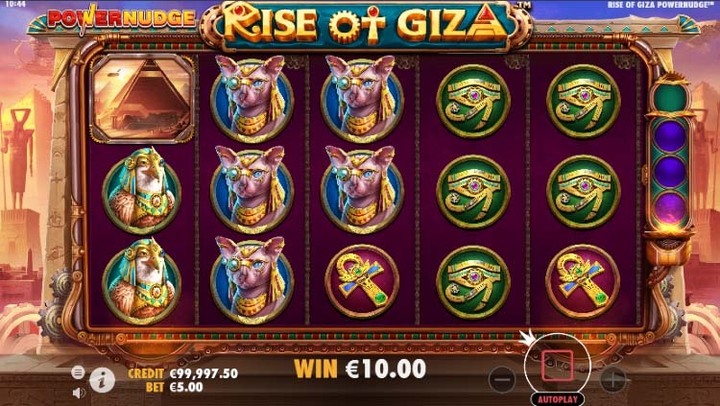 Microgaming, one of the online casino gambling pioneers, came out with several exciting new slots, including Break The Bank Again Megaways, Amazing Link Apollo, Africa X UP, and Sisters of Oz: Jackpots. Push Gaming, one of the most popular software providers among casino streamers, added Mount Magmas to its high-quality portfolio. The game comes with several thrilling bonus features as well as a Daily and a Mega Jackpot.

For players who like horror-themed games, Quickspin has produced zombie-infested reels in the Cabin Crashers slot with sharp graphics, Wild Multiplier, and Free Spins round. The studio has also decided to present players with an upgraded version of Seven’s High slot. These modernized reels allow players a chance to choose between Classic and Ua mode which differ in volatility levels. Special extras in this case come in a form of a Progressive Wild, Respin Feature, and Bonus round with up to 35 Free Spins.

Roshtein, the number 1 casino streamer and one of the top 10 most-watched streamers on Twitch, has made history in the month of August – breaking all the records by landing some jaw-dropping wins. While spinning reels on a legendary Pragmatic’s Fruit Party slot, Rosh managed to win a whopping $2.5 million in the base game.

However, this is not the only game on which he managed to break the $2 million barrier. While playing Mystery Museum by Push Gaming, one of the favorite casinos streamers’ slots, Roshtein got the full screen of Pharaoh symbols and ended the 8-spin round with an astonishing $2,008,800. Pragmatic Play releases 5 Lions Megaways and Chilli Heat Megaways were also quite generous and cashed out more than $1 million each.

Check out Roshtein’s $2 million win on the Mystery Museum slot:

In the last couple of months, Roshtein has become a huge fan of the Plinko game and started including it into its daily streams regularly. Probably one of the simplest games ever to be included in the online casino catalogs, Plinko can bring great prizes! While betting on $2,000, Rosh managed to hit a 1,000x multiplier and ended up boosting its casino balance by $2 million.

Roshtein’s friend and one of the top casino streamers DeuceAce celebrated a 1-Year anniversary of casino streaming on Twitch. In a 16-hours long stream, DeuceAce organized dozens of giveaway raffles for his loyal followers. Rosh was a guest on his celebratory stream and they started with betting on Plinko. Increasing the bet to $2,000, the duo was ecstatic when they managed to land a 1,000x multiplier and win a $2 million prize.

The casino streaming scene went through a bit of a shook up with Twitch imposing new regulations on its users and forbidding sharing links to websites offering slots, roulette, and dice games. Users were given only 5 days, until August 17, 2021, to remove links and referral codes from their channels or they would be facing sanctions. In their creator update, Twitch stated that the reason for this move is:

“To prevent harms and scams created by questionable services that sponsor content on Twitch, we will prohibit sharing links and/or referral codes to sites that offer slots, roulette or dice games”

The month of August brought certain legislative changes that will improve the state of online gambling and make it more accessible. Starting from October 1, 2021, the legal remote gambling arena in the Netherlands is going to be officially opened so the Dutch Government is now in the process of reviewing and approving applications. Neighboring Denmark has launched a new dedicated board Spilreklamenævnet for handling players’ complaints regarding advertising in the gambling industry. Mortne Ronde, the board member, said:

“In the gaming industry, we are very aware that we bear a responsibility for the users who use games. With the Gaming Advertising Board, we now have an effective watchdog, which must help to ensure and maintain responsible and ethical marketing of games”

Irish Bookmakers’ Association (IBA) is supportive of the ban on credit cards used for gambling purposes in this European country. This ban will be effective in both online and land-based businesses and is thought of as a way to encourage stronger and safer gambling policies. The credit card ban is being talked about in Australia as well. Some of the country’s biggest operators, members of Responsible Wagering Australia, have decided to support the ban on credit cards when it comes to online gambling. However, regulatory approval is necessary for this ban to be implemented in Australia.

The German Fourth State Treaty on Gambling aka GlüNeuRStV became effective on July 1, 2021. The Treaty covered licensing for slots and poker games but didn’t cover non-poker table games. So, this part of the gambling industry in Germany is handled by each state individually and Nordrhein-Westfalen, the German most populous state, has opened the tender and is granting 5 non-poker table game licenses that will be valid for the next 10 years.

US Gambling Scene Heats Up

The New York State Gaming Commission has come out with a list of operators wanting to get a mobile betting license. The state has to select only 2 from the list but the players can only have an account on one of the operators. The Illinois Gaming Board is accepting the applications for three additional online-only sports betting operators and the deadline is December 3, 2021. The licenses are available only to operators that do not currently hold a license in the state or have a temporary operating permit.

New Jersey has become the first state to legalize fixed-odds horse betting after its Governor Phil Murphy signed a new bill into law. In North Carolina sports betting bill that would legalize retail and online sports betting in this US state has passed its first reading in the House of Representatives. Titles Senate Bill 688 is now referred to the Committee on Rules, Calendar, and Operations of the House.