Pragmatic Play invites players to sharpen their blades, strap on some sandals and join the amazing adventure in the new Sword of Aries slot. Inspired by Greek mythology, here one of the main Gods guides you through an exciting slot journey that can result in hitting a maximum prize of 10,000x the bet.

Resembling the layout seen in Gates of Olympus, the mighty Aries stand by the 6×5 grid with 20 paylines and tumbling mechanics, closely watching everything that happens on reels. It also doubles as the Scatter symbol with a special power – it’s not exploded by the Bomb symbol. 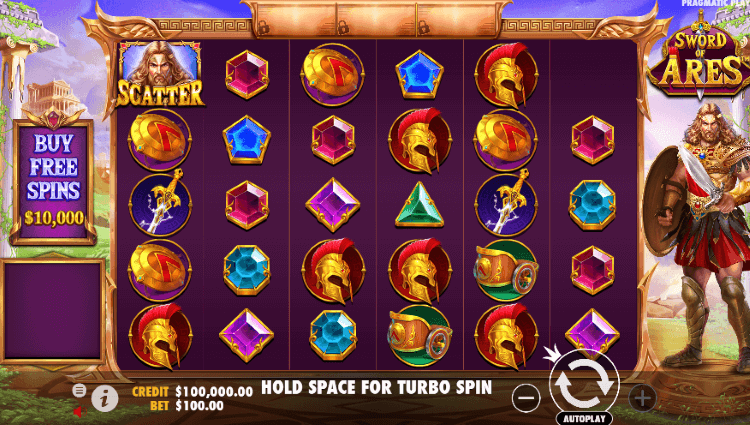 Speaking of, the Bomb symbols come in 4 variations on all reels, during both the base game and bonus round. Whenever they hit, Bombs stay locked on the grid while the other symbols tumble.

If there are no more winning combinations, they explode and remove all symbols from the board except Scatters. To make things even better, removed symbols are collected by the multipliers and new symbols drop down from above.

Each spin starts with multiplier values locked. The number of winning or exploded symbols is collected and multipliers are unlocked when the set collection of points is reached.

At the end of a tumble sequence, the winning total is multiplied by the highest unlocked multiplier while in the base game, the values are as follows:

Multipliers can go up to 500x in the bonus round with 15 free spins, triggered by landing of 4 or more Scatters. During free spins, the meter is extended to the sixth and most valuable 500x multiplier, unlocked when 235 symbols are collected.

Although Sword of Aries is not an official sequel to Gates of Olympus, it features a lot of common elements, both visually and gameplay-wise. Still, in its new slot, Pragmatic Play has boosted bonus rounds by adding the collection feature to unlock the multipliers, making the whole play much more engaging. 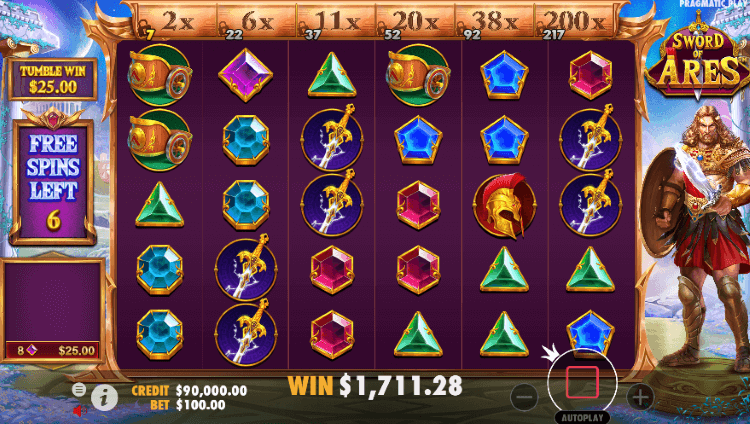 Another thing that’s boosted is the winning potential of up to 10,000x the stake, which is the provider’s third game in a row with the such maximum prize, following Muertos Multipliers Megaways and Big Bass Bonanza – Keeping It Reel. There’s no doubt this Greek-inspired game will be an instant hit as it is a great addition to the developer’s portfolio of premium slots.

Pragmatic Play launches up to 7 news slots each month, which is alone quite impressive. Especially considering it’s just a part of its products that include sportsbook, live casino games and online bingo releases. But launching three games with such high winning potential in one month is an extraordinary achievement and just one of the reasons why players love games by this provider.