With its new Rock Vegas slot, the Pragmatic Play presents an interesting premise that gambling existed in the prehistoric era as well. This won’t be so surprising, considering that it’s one of the oldest social activities, dating thousands of years BC.

The rocky part of the game’s name addresses the caveman theme, while the Vegas part suggests the first man loved to gamble. Visuals are vibrant and colorful, while symbols spinning on the 5×3 grid with 20 paylines are done in a cartoonish design.

However, don’t let this fool you – the volatility is very high in this release, ranked 5 out of 5 by the provider. Playable from $0.20 to $240, the Rocky Vegas slot offers a massive maximum potential of up to 10,000x the bet.

Wilds aren’t a part in this game, with Scatters holding all the power. Represented as a rock with a bonus sign, Scatters can appear on all reels. Three of them landing at the same time is enough to trigger the Mega Hold and Spin feature.

When this round is on, the scenery shifts, replacing the existing reel setup with a bigger, 10×10 grid. The normal symbols are replaced with blue, green, yellow, pink, and red rock cards and these are the only images able to land during the bonus feature.

Will rocks of all colors appear depending on the number of Scatters that have triggered the Mega Hold and Spin. All rocks are present for 3 Scatters, four removes the blue rocks, while the lowest green and blue rocks are removed if 5 Scatters have started the bonus round. 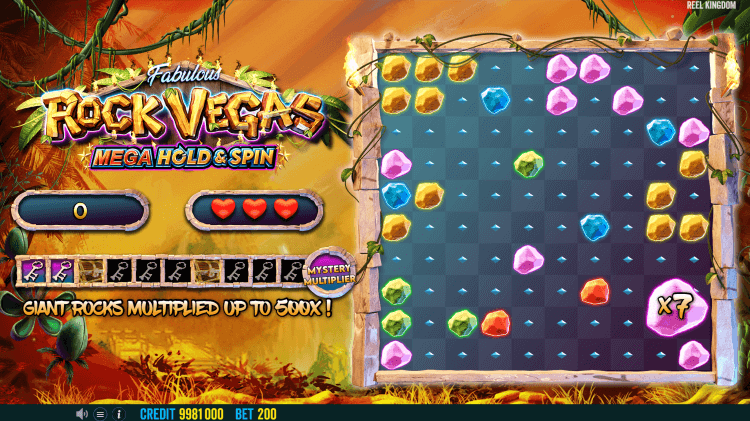 Once a new grid is created and rocks organized, the feature starts with 3 respins. Rocks are staying locked in places every time they land, forming clusters that merge to create a big rock. In the process, they also gain a random multiplier of up to 100x.

Another thing that can be attached to rock symbols is a key icon, collected on a trail on the left side of the grid. Whenever one segment of the trail is filled, keys unlock chests containing some of the following prizes:

Rocky Vegas Is a ‘Must-Try’ Slot

Rocky Vegas slot is a fun, beautiful, highly volatile release with an impressive max win of up to 10,000x the bet. Released shortly after Gold Party, Wild Depths and Magician’s Secrets, it is an excellent addition to the Pragmatic Play’s portfolio of premium titles.

“Rock Vegas™ provides players with a thoroughly exciting experience, as well as a unique selection of bonus features that complement each other nicely. The prehistoric theme, in conjunction with the modern reels and engaging bonus features, stays true to our ethos of creating fantastic games and we can’t wait to see how our players respond!”

It’s hard to surpass the gorgeous visual appearance of this slot. Thanks to superb graphics and animation, it is a joy to play. Add to that a great bonus round with an expanded grid, multipliers flying left and right and you have an outstanding game, suitable for different types of players.