One of the most popular live streaming service platforms has announced on its official Twitter account upcoming changes to its regulation regarding iGaming content. The Twitch gambling meta policy update will take effect on October 18th, but the platform promises to release the full policy language and more details before that date.

According to announced changes, the platform will prohibit the streaming of gambling websites that feature slots, roulette and dice games unlicensed in the US and other regions that “provide sufficient consumer protection”. Streaming from sites that offer sports betting, fantasy sports and poker will not be affected by this restriction. 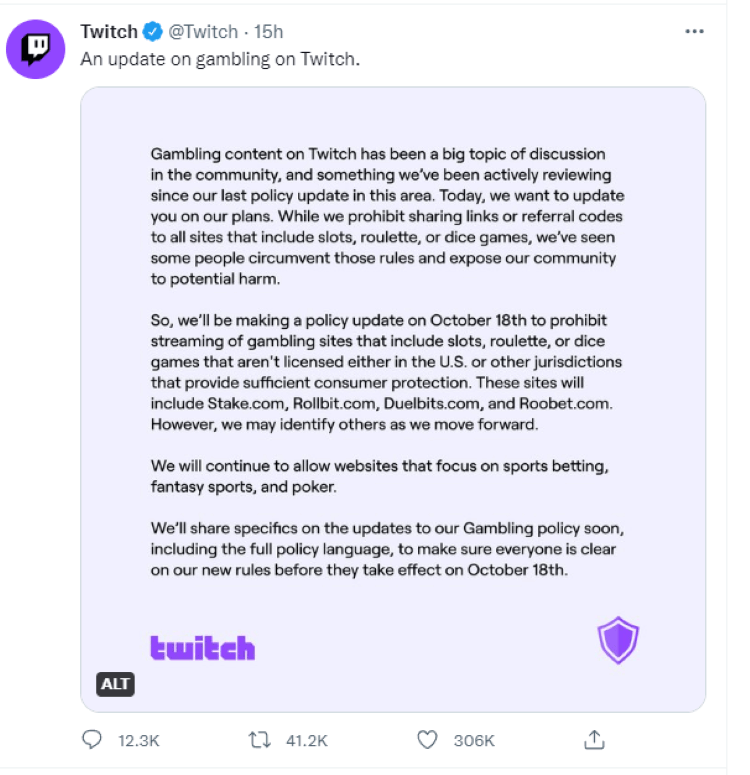 Discussion around gambling on the platform is present for some time, but recently the debate has spiked. Twitch’s response to the pressure of anti-gambling streamers is policy changes and excluding brands that don’t fulfill its newly imposed requirements. Streamers will still be able to freely stream from social casinos, sports betting and fantasy sports online platforms as well as poker-focused sites.

How It All Started

The decision of changing the Twitch gambling meta policy didn’t come out of the blue. In fact, there was the whole drama behind it.

It all started when the news broke that a streamer called Sliker, scammed viewers and fellow streamers for over $200,000 to fund his gambling addiction. In a half an hour long Twitch stream, the streamer through tears admitted that he had misappropriated viewer donations for gambling purposes.

This triggered some streamers including Pokimane, HasanAbi, and Asmongold to call on Twitch to ban slots content on the platform. In a live stream, Pokimane, Mizkif, and Devin Nash went so far as to threaten to do a one-week content strike during the high-ad season over Christmas and boycott the platform if it did not ban gambling.

With the hashtag #TwitchStopGambling, Pokimane invited her followers on Twitter to “like if twitch should ban gambling”. Both the hashtag and a streamer’s post got quite a momentum and just a few days after Twitch announced the changes to its gambling policy.

Although many support this decision, many are against it and feel like both the platform and streamers should have handled it better. The “whistleblowers” with disreputable content of their own have got what they have asked for by fishing for engagement that casino streamers naturally already have.