No Limit City is one of those iGaming software providers that never cease to amaze. Each new release is better than the last one, guaranteeing fun and thrilling gameplay enriched with twists and turns. Evil Goblins xBomb slot has hit the market, taking the industry by the storm.

After the epic battle in Das xBoot, it’s time to try your luck with blood-hungry creatures that lurk underground, preying to the next delectable meal. One wrong move and you might find yourself tied up and ready to be devoured, but there’s certainly a reason to take your chances – a winning potential of up to 31,969x bet! 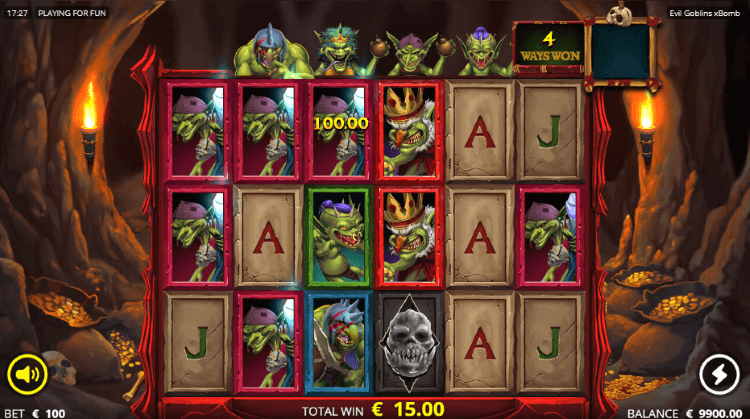 The game is played on a fairly standard 6×3 grid that the xBomb feature can expand up to 7 rows high. This is yet another comeback of the xBomb mechanic, but this time it comes with an even bigger bang since it’s paired with extraordinary bonus features.

Accessible on any device from mobile to desktop, players can get a piece of action by placing a bet anywhere from $0.20 to $100. Evil Goblins is marked as an extremely highly volatile slot, available with a dual RTP setup at 96.14% and 94.21%.

This title is available on all Nolimit City partners starting from October 12th, 2021. Per Lindheimer, the brand’s Product Owner, commented:

“Naughty and packs a punch with xBomb and an increasing reel area along with its win multipliers. Evil Goblins will be an adventurous encounter with loads of exploding cascades and gnarly bonus modes”.

The game features Dead Wild that doesn’t do anything on its own. However, three or more Dead Wilds transform into Resurrection Wilds. But there’s an extra perk – the last Wild symbol landing, also boosts a massive multiplier of 11x, 33x or 55x (depending on the number of Wilds).

Don’t be afraid of the goblins popping up on top of the reels for each new spin.
They are an ugly bunch for sure, but if the symbol on the reel matches the goblin from above the grid, it activates the Goblin Sacrifice feature.

The inevitable explosion of the xBomb removes all symbols except special ones – Scatters, Dead Wilds and Resurrection Wilds while increasing the win multiplier with +1 at the same time. Every time an xBomb symbol appears, one row will be added after the explosion, up to 7 rows. Each xBomb symbol also adds one row to the grid, potentially expanding it to a max of 7 rows. Regardless if there’s a win or not, all xBombs explode before the next cascade.

When all goblins at the top of the reels are matched, the Evil 4 feature is triggered. The matching goblin takes the place at the throne on reel 1, boosting a multiplier of x4 or higher. Symbols are counted as 4 of each and multipliers increase by 1 each time a matching goblin appears on the top reel.

Three or Four Scatters appearing on reels simultaneously award 8 or 9 Fresh Meat Spins respectively. Better yet, Dead Wilds are guaranteed on each spin, while a chance of getting a Goblin Sacrifice or triggering an xBomb is much higher.

Hitting Evil 4 during Fresh Meat Spins upgrades this bonus round to Goblins Feast Spins, and any collected multiplier is carried over. The feature gives you 4 spins with the Evil 4 multiplier activated and whenever a matching goblin appears on top of the reels, the multiplier increases by 1. Such goblin stays in position for the rest of the feature and spins reset back to 4, up to four times in total.

For impatient players, the game offers the option to buy free spins. Both Fresh Meat Spins and Gobling Feast Spins are available in regular modes and enhanced with xBombs are guaranteed on each spin, but the second option doubles the price.

Evil Goblins xBomb slot has all the elements to become an instant hit. No Limit City did an exceptional job in combining special features in a way that every spin comes with suspense. The provider’s latest release is a real nail-biter every slot lover should try out.